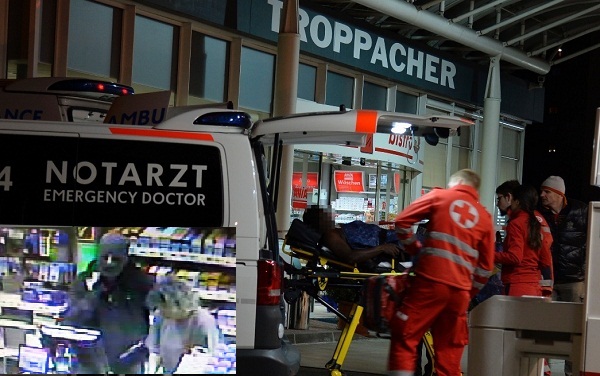 Remember the Kenyan guy that was shot during a robbery at a Petrol station, as he tried to protect the cashier? (Read: here)

The 45 year old Kenyan was released from hospital earlier this week after close to a whole month. The man who was shot end of February at a Petrol station in Innsbruck, was rushed to hospital after the incident where he underwent surgery. After the surgery, he was induced into an artificial coma for two weeks.

Unfortunately, the man who had been shot in the stomach could hardly remmeber anything about the incident by the time he woke up in mid-March. The investigators couldn’t get much information from the man and now have to look elsewhere or hope the man’s memory returns.

The bullet that hit the Kenyan man could also not help the investigators as it was badly deformed when it hit the man. The level of deformation of the bullet made it hard for the investigators to identify the weapon used by the robber. The catridge of the bullet also couldn’t be found at the scene of the crime. “This could mean, that the perpetrator used a revolver. With revolvers, the catridge remains in the barrel of the gun,” Edmund Wiesbauer, an investigator with the Landeskriminalamt explained.

The suspect remains at large and the police do not rule out the fact that this guy could be a serial criminal. The suspicion comes from the location of the incident, the petrol station lies between two other crime scenes namely the Sparkasse that was robbed in March and a supermarket that was attacked end of January.

“Whether the crimes are indeed linked, we will probably find out only when we have found the perpetrators,” Edmund Wiesbauer added in closing.