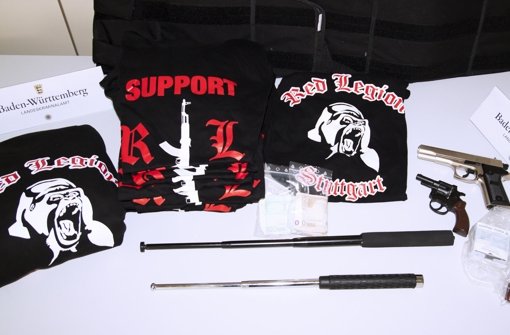 A court process against three young men who are members of the famous banned street gang, Red Legion, started last week in the District Court in Stuttgart under high security detail.

19 policemen were stationed at the court room and searched everyone who wanted to enter the court room. This was due to fears by the judge that the two gangs, Red Legion and Black Jacket, might end up attacking one another as they did a few weeks ago during another court process.

The three young men were in court to answer to charges placed against the for attacking a former member of their gang. According to the prosecutor, the victim had testified against the gang during a previous court process and had decided to leave the gang once he understood their actions. The three however, wanted to teach him a lesson for testifying against the gang. They lured the young man into a courtyard of a school in Winninden in Rems-Murr-Kreis on the pretence that an old friend wanted to talk to him. On 20th February at 4am when the victim showed up, the three plus another man who still remains unknown, beat the man into a pulp.

Due to high blood loss and severe facial fractures, the victim collapsed. The prosecutor told the courts that the victim would be dead if it weren’t for the quick medical attention he got.

The Kenyan has been charged with attempted murder, it is alleged that he stabbed the victim in the back ten times with a knife he had in his pocket.

One of the young men that lives in Leutenbach was also accused of drug dealing. The police on searching his home had found large amounts of narcotics and a huge sum of money assumed to have come from selling the drugs in Rems-Murr-Kreis. The young man also admitted in court that he was an addict and consumed up to 21 grams of hard drugs a week.

The two biker gangs, Red Legion and Black Jacket have been involved in fierce battles over territorial ownership for many years. Two weeks ago a member of the Red Legion was sentenced to life imprisonment over the murder of another member of the gang who wanted to leave the group. The Red Legion gang is ranked as one of the most dangerous gangs in Germany.