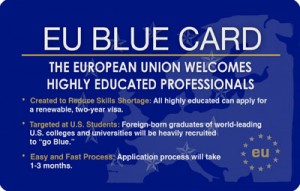 The EU Blue Card was introduced in 2012 in the hopes that foreign professionals would flock the German job market. Unfortunately, assessments of the progress still point at the Blue Card being a HUGE flop.

The Blue Card that was introduced on 1st August 2012 has had 7000 applicants of whom 4000 were already in Germany. That is approximately 411 applications a month or 14 applications a day since introduction. The numbers may look big but in comparison to the Green Card, there’s no comparison. In 2012 alone, one million Green Cards were issued.

According to the head of the Federal Job Agency (Bundesagentur für Arbeit (BA)), Frank-Jürgen Weise, the hurdles set for the Blue Card are too high and might be the reason why most foreign professionals aren’t applying for it. Mr Weise advices that some requirements should be done away with while others should remain. Among those to be revised is the income.

The current income requirement is at €44,800 with the exception of Doctors, Mathematicians, Engineers and IT Professionals that are allowed to earn a bit less i.e. €34,944.

You can read about the EU Blue Card, when, how and where to apply for it here.