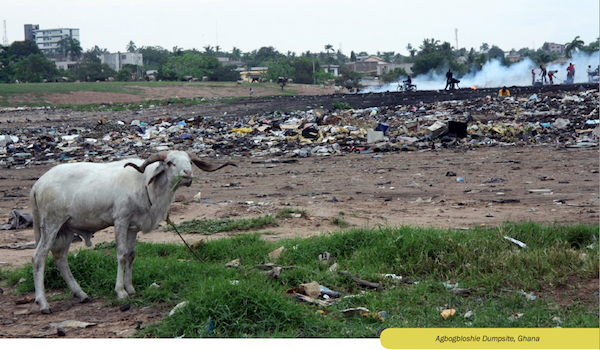 Agbogbloshie, in Accra, Ghana, is the second largest e-waste processing area in West Africa. E-waste, or electronic waste, is a broad term referring to a range of electronics, including refrigerators, microwaves, and televisions. Because of the heterogeneous composition of these materials, recycling them safely is complex and can require a high level of skill. Ghana annually imports around 215,000 tons of secondhand consumer electronics from abroad, primarily from Western Europe, and generates another 129,000 tons of e-waste every year.

Kabwe, the second largest city in Zambia, is located about 150 kilometers north of the nation’s capital, Lusaka. A 2006 health study discovered that, on average, children’s blood lead levels in Kabwe exceeded the recommended levels by five to ten times.23 This was the result of contamination from lead mining in the area, which is situated around the Copperbelt. In 1902, rich deposits of lead were discovered, leading mining and smelting operations to run almost continuously for over 90 years without the government adequately addressing the potential dangers of lead. Smelting was largely unregulated throughout the 20th century in Kabwe, and these smelters released heavy metals in the form of dust particles, which settled on the ground in the surrounding areas.24 While the mine is currently closed, artisanal activity at tailings piles continues.

The Niger River Delta is a densely populated region that extends over 70,000 km2 and makes up nearly 8% of Nigeria’s land mass. It is heavily polluted by oil and hydrocarbons, as it has been the site of major petroleum operations since the late 1950s.

The full list of toxic places on earth are:

Is it just me or are all those “toxic” places in Africa caused by Westerners: in Ghana electronic waste from Europe, Zambia lead mines that were run by European companies and the famous River Niger Delta where Shell has been for centuries.

You can read the full report here: Ten Most Toxic Places on Earth