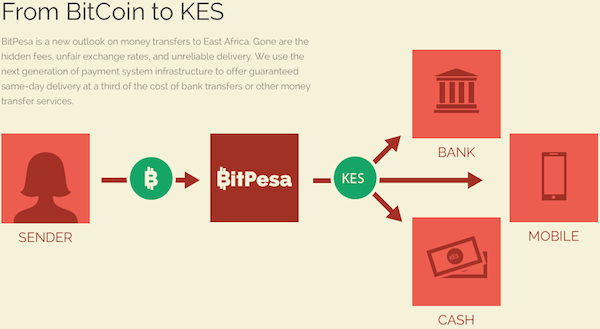 Yesterday I told a friend about this article I was writing and when I told her she could transfer money to Kenya at €0.40. She laughed and when she got serious again, she asked if the money would land in Kenya or if it would hijacked in the high seas by pirates. Well, believe it or not, it will actually land.

Bitcoin is an online currency which is independent from governmental influences. It’s a non-governmental virtual currency. It’s online money, almost like the Bangla Pesa that was introduced at the Kenyan coast. It allows people to make transactions easily and at very low rates.

StartUps in Kenya have joined the bandwagon and are bringing the Bitcoin home. The Bitcoin has been around since 1998. Kenyans are now joining in and this could revolutionalize how people send and receive money. Most StartUps in Kenya are focusing on integrating the whole Bitcoin system into Mpesa.

How does Bitcoin work?

You register at one of the online Bitcoin selling points. The Bitcoins you buy are put in your “wallet” from your wallet you can send Bitcoins to friends’ and relatives’ wallets.

Kipochi was the pioneer in bringing Bitcoin to MPesa and has been around since early this year. The only disadvantage Kipochi has is that is it a web application, so it can only work on a phone with internet. Restricting it to a very small group in Kenya.

A new entrant is BitPesa, another wallet. The idea behind BitPesa is to allow their users to send the money from BitPesa to a bank account, mobile money transfer or convert it to cash. This will be ready for use from March according to team. The team is still in talks with banks and mobile money transfer companies, so for now it’s not yet confirmed whether or not they will integrate MPesa to their payment options.

Kipochi charges €0.40 for transactions. It sells a bitcoin for €804.67. For our €300, €290.84 will be received by the recipient in Kenya. The current exchange rate in Kenya is €1= KSh.113.64. (I assumed that the Bitcoins sent would be received via Kipochi in Euros then the Euros converted to Shillings, if the Bitcoins are directly converted to Kenya Shillings, then the amount received will be same as that for BitPesa).

BitPesa charges 3% of amount sent in transaction fees. (The calculation assumed that the Bitcoins are directly converted to Shillings).

Equity Bank allows its customers to receive money from Paypal. To do this, you have to transfer the money from your Paypal to the Equity Bank account in Dollars current exchange rate is 1 Euro = 1,3117USD. Paypal charges you a transaction fee of 1,9% + 0,35€. The money arrives at Equity in dollars and has to be converted to Shillings, exchange rate is at $1=KSh. 83.55