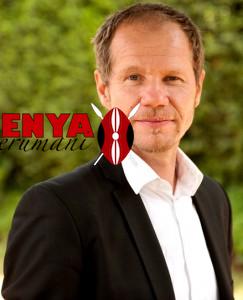 Harmut Fiebig, a remarkable man from Köln who fell in love with Africa at a very young age. He’s German but spent his formative years in Cairo in Egypt.
He attended the German school but even that didn’t make him feel “German” enough. When he came back with his parents to Germany, he was never settled as he felt “unGerman”.
After his Abi and Zivildient in Hamburg, at 21 he  took part in a long distance ride  with his bike from Konstanz in Germany to Capetown in South Africa
After his ausbildung and studies in Agriculture, he decided he would go back to East Africa and specifically to Tanzania. He didn’t want to go to Kenya because Kenyans were too fast, tough and “unAfrican”, Tanzania felt safer as life was slower and much more closer to Africa.

Unfortunately the program he was to work with had no opening for him in Tanzania and he was forced to go to Kenya. But he considers it a blessing in disguise and he even later went ahead to write a very comprehensive guide book for tourists on Kenya, in the 21 years he has travelled all over Kenya, he believes he knows the country better than even some natives.

He later took all his savings and moved to Kenya to start the new program. In 2010 he launched a program to help celebrate Kenyan treasures. In time for Kenya’s Jubillee celebrations in 2012, he aims to document 50 treasures. He feels that the Africans have completely forgotten their traditions and culture which were the key aspects to help conserve their environment. He also feels that very little about Kenya is marketed to the world , Kenya has more than just the white sandy beaches and the animals.

You definitely have to listen to the interview he had at WDR5 as he talks about Kenya…..it’s amazing to listen to people who love Kenya…..Listen to the German Interview: Helmut Fiebig beim WDR 5

Read more about the treasures at: The 50 Treasures of Kenya
Read about Harmut at: Harmut Fiebig
The treasures will be revealed in Darmstadt in April 2013, if you are interested get your ticket: WEIT SICHT