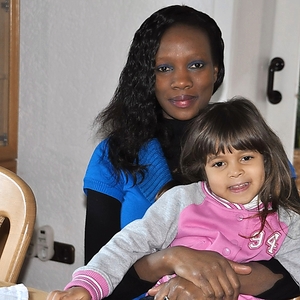 “I was young and ready for adventure”, Marion Kuhl says when asked what made her come to Germany. She didn’t have any high hopes, “I only wanted to learn a foreign language and enjoy their culture”, she continues to explain.

After her intensive German course in Kenya, she came to live with the Hauser family in Kellinghusen as an au pair. What happened after that was not what she had planned for. She met her current ex husband and gave birth to her daughter Freyja then decided to remain in Germany.
“Many think it’s easy to move to a foreign land, but it’s not”, she adds. As she came to learn through her own experience. Despite having attended a language course, she still got lost in translation. She took up a language course in Kellinghusen and after that at least she could make it by. Her biggest problem was the speed of life here, “At home everything is pretty slow, but here everyone is in such a hurry”.

After her marriage failed, all she wanted to do was run away. She moved to the Frauenhaus in Burghausen where she didn’t have an easy time.

“As a foreigner it’s so difficult to find an appartment to rent”, she adds as she talks of her dissapointment as she tried to build a new life for herself and her daughter. Eventually she met a landlord in Straubig who agreed to rent his house to her but only until he found a buyer for the apartment.

At one of the locals, she met Schimdemeier from Saal and they became friends. After a while she got a new apartment in Saal and moved there; she even got a job at Schmidemeier’s family business. Now that they’re an item, all Marion wants is to intergrate and make friends. Unfortunately Marion hasn’t been able to communicate with the other mums at the Kindergarten where Freyja goes to school.

“Aller Anfang ist schwer”
What hurt her most was when people dismissed her thinking she couldn’t speak German or wouldn’t know how to handle herself. But now, she’s excited about her planned trip back home to Kenya in a few days.

She hopes Saal will treat her well and be her new home.