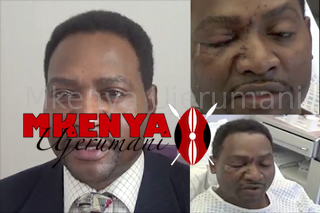 You might know him from his videos on youtube, Jimmie James Channel, or just as a member of Tembo e.V. in Berlin.

A Kenyan was seriously injured when he was attacked by two men at a discotheque in Berlin. Germany. The man identified as Jimmy C was working with a logistics company in the city over the New Years’ weekend where he was maintaining the grounds and surroundings when two men  called him into a rest room as if asking for some help.

When Jimmy entered the restroom, he approached one of the men seeking to know what they wanted. The second man however approached him from behind and hit him with a glass which shattered on his face inflicting serious injuries.

As Jimmy tried to flee the scene, one of the men tried to restrain him and attempted to push his head into a toilet while kicking him. The two men yelled racial slurs as they rained blows on him.
Jimmy was fortunate enough to escape and run through a crowd of revelers eventually getting to the club’s security desk. The club manager called the paramedics who had to wait for the police to arrive at the scene. The police however did not show up and he was rushed to hospital. The police showed up when Jimmy was being prepared for surgery.
The Kenyan community is hoping for justice to prevail in this case as well as others that are still pending.
A group by the name New Globe Art Factory interviewed Jimmy while he was recuperating in the hospital in the hope that the case would go public and shed some light on instances of racial violence against foreigners in Germany.