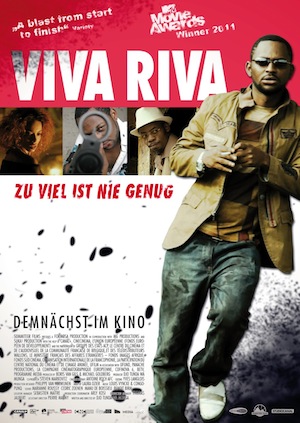 This movie was shot in Kinshasa a seductively vibrant, lawless, fuel-starved sprawl of shantytowns, gated villas, bordellos and nightclubs is directed by  Djo Tunda Wa Munga’s, a congolese.
The movie is based on Riva a small time operator who has just returned to his hometown of Kinshasa, Congo with a major score: a fortune in hijacked petrol. With wads of cash and all out for a good time, Riva is soon entranced by the beautiful nightclub siren Nora (Mannie Malone), the kept woman of a local gangster. Into the mix comes Riva’s Angolan crime lord ex-boss relentlessly seeking the return of a certain stolen shipment of gasoline.

The movie has won numerous awards since its release in 2011 and is airing in cinemas in Germany this month from 15.03.12 to be exact. Look out for it. Check out the oficial movie site for further details vivarivamovie.com