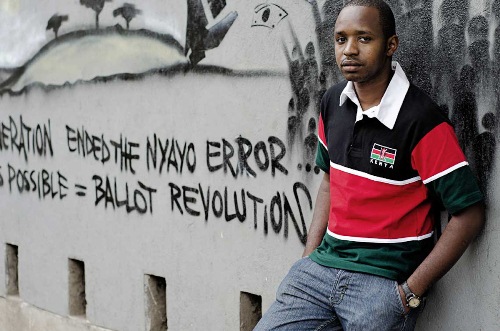 Last month was a great month for our Boniface Mwangi, whose organisation Pawa 254 not only got to share the Theodor Wanner Preis with Yoko Ono but he got to meet the Beatles First Lady and also receive an autographed copy of the iconic nude photo of John Lennon and Yoko Ono.

Yoko Ono, the widow to John Lennon, one of the founders of the famous boy group Beatles, was feted last month in Berlin for her activism. She received the award at the Brandenburger Tor in the presence of the Foreign Affairs Minister, Guido Westerwelle. The price which comes with a €10,000 token that should be donated by the winner of the price to any organisation went to Pawa 254, an organisation run by Boniface Mwangi in Nairobi to help young photographers in Kenya and create awareness about the role of the youth in building the nation.

Yoko Ono, learnt of Pawa 254 from one of the organisation’s friends in Berlin. Yoko Ono found it interesting enough and decided to donate the price money to the organisation.

This month will have Boniface come to Berlin again, this time to give a lecture titled:

On the 12th of November from 6pm

Another Kenyan taking part in the lecture is Dr. Oduor from Kenyatta University, who’ll talk about Identity politics in the twenty-first century: A kenyan perspective. On the 4th February 2014 from 6pm at the same place.

Boniface is the founder of Picha Mtaani. He’s an award winning activitist whose been ruffled up by the Kenyan police a couple of times for standing for what he believed in. His exhbition, Picha Mtaani, was to show pictures of what happened during the post election violence, to remind the people of what happened and have people discuss what happened openly so as to avoid it happening again. This saw him and his pictures kicked out of most places he tried to show the pictures. You can watch the documentary below.