Having lived in Germany for a while, you get used to the numerous public holidays that you take them for granted. If you’ve never been to Germany on the other hand, let me give you a reason to do so…..the public holidays.

In 2017 employees working in Bayern (Bavaria) in addition to the 30 working days leave and the 104 weekend days off; will get 14 public holidays. Bayern gets the majority of public holidays due to the numerous religious holidays.

If you’re like most people though, I’m sure you just enjoy the days off without caring much about what they are about, but wonder no more.

Just like in Kenya, 1st January is a holiday in Germany. However, unlike Kenya, holidays that fall on Sunday aren’t automatically pushed to Monday. So this year, that day didn’t count. This is a national holiday, so all states get a day off.

Like most other nations of the world, Germany on 1st May celebrates the International Workers’ Day or Labour Day.

This is a national holiday that celebrates the reunification of East and West Germany after the fall of the Berlin wall.

For a country that isn’t very religious, it is interesting to see the number of religious holidays celebrated in Germany.

This day celebrates the “Three holy Kings”, you might remember them better as the 3 wise men that were led by a star to go see Jesus after he was born in Jerusalem. Although the Christian church has not completely agreed on the number nor on their status, Germany named the day after the 3 Kings.

Depending on which State you live in, you might get kids come by your house and offer to sing for a small contribution to the church. Sometimes, they also bring stickers (check image for example) and request to stick them on your door.

This is a regional holiday and only those in Baden-Württemberg, Bayern and Sachsen-Anhalt get a day off.

Good Friday is celebrated in most Christian countries and it commemorates the crucifixion of Jesus Christ. This is a national holiday in Germany.

Easter Monday commemorates the resurrection of Jesus Christ. Just like Easter this is also a national Holiday.

Ascension Day is celebrated 40 days after Easter, it is in remembrance of Jesus Christ’s ascension into heaven after his resurrection 39 days prior.

Germany also celebrates Fathers’ Day (Vatertag) on this same day. Depending on which version you listen to, it could either be to celebrate the carnivals in villages where men were awarded prizes or the one day of the year men get a day off to go get drunk.

Pentecost Monday is celebrated the 7th Monday after Easter and 90 Days after Ash Wednesday. It commemorates the coming of the Holy Ghost to the Apostles and marks the end of the Easter cycle that starts on Ash Wednesday.

The Feast of Corpus Christi (Body of Christ) is a Catholic festival celebrated as part of the Eucharist. The feast celebrates the body and the blood of Christ. After the Reformation, the celebration was removed from the Protestant church and is currently only celebrated in the Catholic Church.

In Germany, the event is only celebrated in Baden-Württemberg, Bayern, Hesses, North Rhine-Westphalia, Rhineland-Pfalt, Saarland, and some local authorities in Sachsen and Thüringen.

Feast of Assumption also known as the Falling Asleep of the Blessed Virgin Mary, is a Catholic festival that commemorates the passing of Mary as well as her ascension to heaven. In Germany, this event is celebrated in Saarland and some local authorities in Bayern.

The Reformation Day commemorates the day when Martin Luther nailed his 95 Theses to the door of the Schlosskirche in Wittenberg. This year in celebration of 500 years since the event, we will be celebrating the year of Martin Luther (Das Lutherjahr), thus the whole country will have the day off.  Typically however, this holiday is only celebrated in Brandenburg, Mecklenburg-Western Pomerania, Saxony, Saxony-Anhalt and parts of Thuringia.

The Feast of All Saints or Hallows’ Day (hence Halloween) is celebrated in the Catholic church in remembrance of all saints both known and unknown. In Germany, it is celebrated in Baden-Württemberg, Bayern, North Rhine-Westphalia, Rhineland-Pfalz and Saarland.

The Day of Prayer and Repentance is a protestant holiday that is based on the story of Jonah, when he was sent to Nineveh to ask the people to repent. It used to be a national holiday in Germany. It is currently only celebrated in Sachsen, while only kids in Bayern get a day off.

I watch a show recently where they asked people on the streets of Berlin, what we celebrate on Christmas Day and less than 50% of those asked knew. If any of those people are reading this, Christmas Day commemorates the birth of Jesus Christ in a manger in Jerusalem.

What we call Boxing Day in Kenya, in Germany it’s called the Second day of Christmas or the St.Stephen’s Day. This day remembers St. Stephen who was the first Christian martyr.

Although called Fat Thursday in English, the direct translation would be Women’s Fasting Night (some towns call it the Altweiberfastnacht or Weiberfasching). Weiberfastnacht is celebrated on the Thursday before Ash Wednesday (which marks the beginning of Lent). On Weiberfastnacht most people will simply dress up and hang out in the pubs with friends. Although not an official public holiday, if you are in the Rhineland, most companies close for the afternoon. The celebration starts at 11:11am. This is also the day women in the office get to chop off the men’s ties. However, a court in Essen recently ruled that if the owner of the tie had not allowed you to do it, you just might have to pay a fine for destroying someone’s property.

This is the peak of the Carnival season in Germany and is marked with costumes and parades (Rosenmontagzug) through the city. Rosenmontag is celebrated on the Monday before Ash Wednesday. Although not a public holiday, it is quite common to have colleagues take the day off especially within NRW for them to go to the main event in Cologne. Traditionally, the biggest parades could only be found in Cologne, Düsseldorf and Mainz, but nowadays, it is quite common to find even very small villages having their own local carnival. This day is marked with costumes, partying and parades where different topics are displayed using floats and people lining the streets are showered with sweets. The greeting during this event is Hellau! or Alaaf! depending on where you are in Germany.

Ash Wednesday is the first day of Lent and commemorates the 40 days Jesus fasted in the wilderness and endured temptations from the devil. This day is celebrated 46 days before Easter. Catholics hold a special mass on this day, where the priest marks their foreheads with blessed ash made from burnt palms that were blessed at the Palm Sunday the previous year.

Palm Sunday is celebrated the Sunday before Easter to commemorate Jesus Christ’s triumphant entry into Jerusalem. It is believed that as Jesus came in riding on a donkey, faithfuls spread before him palms. However, as some countries do not have the appropriate weather for palms to grow, in some countries other native trees were used instead thus in some places the name of the palm is replaced by a native tree e.g. Yew Sunday.

Mother’s Day – Second Sunday of May

This day that celebrates mothers is in Germany celebrated the second Sunday of May. In Germany, this day was created by the Association of Florists, who decided to use the day to increase their sales by asking people to celebrate their mothers with a bouquet. However, the choice of the second Sunday in May, means that sometimes Mother’s Day and the Pentecost fall on the same day for example in 1978, 1989 and 2008. Being a commercial day, most florists have their shops open on Mother’s day, but the church doesn’t allow for shops to be open on Pentecost, so in such a case, the Association of Florists is tasked to pick a different date for Mother’s Day.

Due to the varying climates and crops, the Erntendankfest is not a fixed celebration in many regions who prefer to celebrate after they harvest. However, the Catholic church fixed the date to the first Sunday of October as the date the church celebrates this. Depending on where you are in Germany, this day can go by unnoticed or can turn into a big festival if you live in a region full of farmers.

If you have kids, this is the curtain raiser of the Christmas Season. It’s held on 11th of November and the children create small lanterns that they carry around in a procession (Sankt-Martins-Umzug) as they follow a man riding on a horse. The event St. Martin honours Martin, who was a Roman soldier, who is believed to have always been generous with the less fortunate. 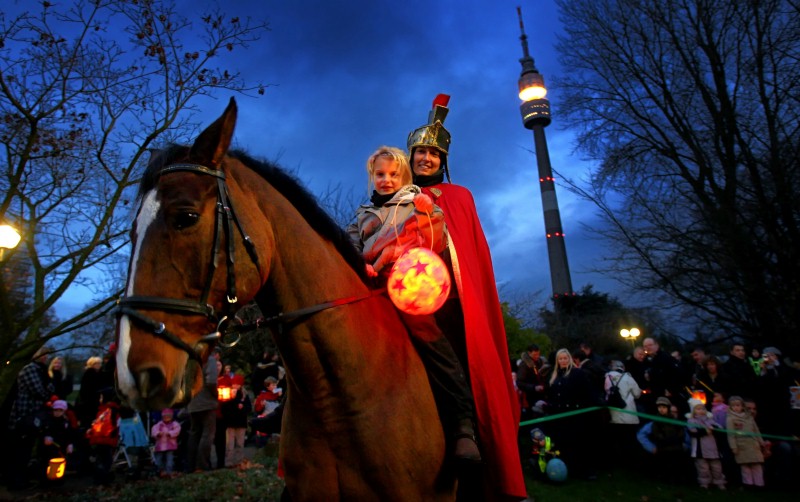 Advent – the 4 Sundays before Christmas

The Advent season prepares the hearts of Christians in preparation to receive the saviour on Christmas Day. In Germany you will find most families will by the Advent wreath “Adventskranz“. Tradition dictates, you light the candles one after the other on the four Sundays before Christmas. 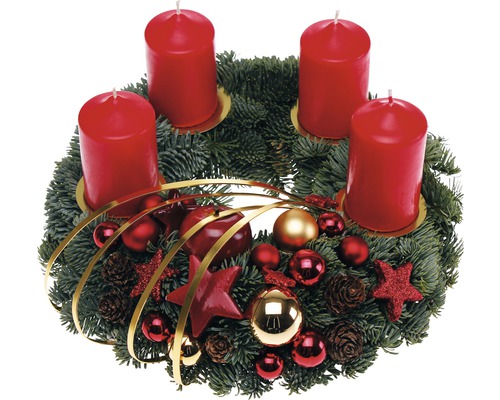 Nikolaustag is the prelude to Christmas and is mainly only a big deal for the kids. The children will leave out their boots and expect Nikolaus to fill them with chocolate and other goodies. It is celebrated on 6th December. 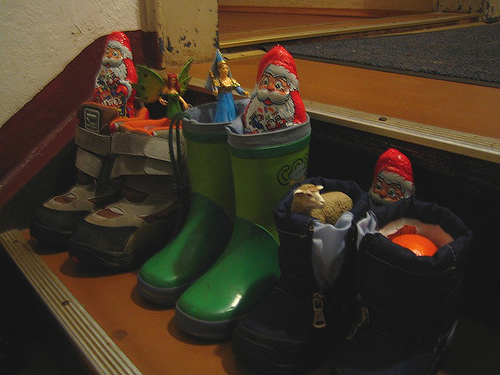