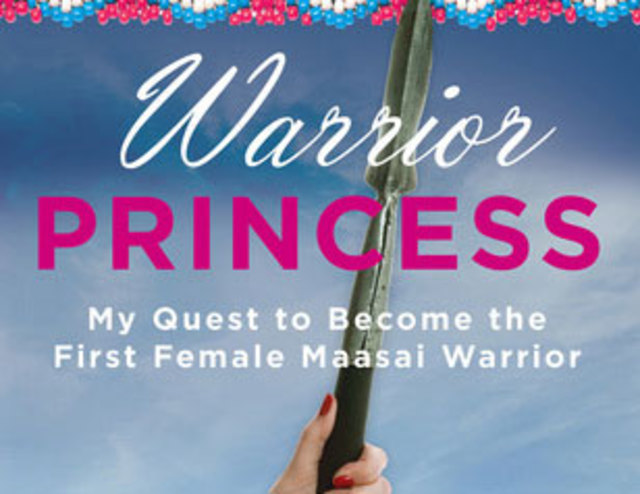 So this spoiled girl from the US decided to go find “meaning” in her life, and as many do, she decided to go to AFRICA. To my dismay, she landed in Kenya among the Maasai. How do you expect to find yourself in a country and culture you’ve never been to??? If you lose your keys, you usually retrace your steps to find where you left them not go to a whole new location, but I digress.

Anyhu, she apparently heard about how Maasais become warriors and she wanted to become one. Unfortunately, the chief named Winston in her book wouldn’t allow her in, as women aren’t allowed to become warriors. In a sign of defiance, she went back to the US and hired a personal trainer. She trained for six weeks before going back to Kenya but Winston was adamant and refused to allow her to take part. In her determination, Mindy (the spoiled American) went to Nairobi where she found a more “open minded warrior” whom she names Lanet. Is she sure the guy was even a warrior…lol…biashara za Nairobi na Mombasa. (Remember Kamau’s who were making a career out of being Maasais?)

So eventually this girl got her day and became a warrior, something she termed as her higher calling in her essay in the Guardian:

Mindy immediately realizes her calling and thus begins her amazing adventure to become the first female Maasai warrior. As a result of this training and advocacy, the Maasai in Loita, Kenya, are leading the charge to change tribal law and allow women the right to become Maasai warriors. Mindy as a tribe member is ready to return to stand with her fellow-warriors against whatever opposition they might face—be it lions, or elephants, or Western-influence.

When the information was released about the planned launch of this book, the reactions were crazy with many coming up in arms over the usual white girl who flies to AFRICA, interacts with Africans then comes back to write a book. This isn’t the first time such a thing happens, remember White Maasai or even The White Women who found love in Samburu or even Paradise Love or the silly RTL and Pro Sieben shows that recently had to be stopped for having Tanzanians and Namibians portrayed like primitive beings?

Why do white women think they can go “find themselves” living with the Maasais??? Why do they go to Africa to make themselves feel better about their miserable lives; then wonder when they find progressive human beings with brains? Remember the lady in Paradise Love was so shocked when the beach boys duped her? As if she thought just because she had given him money, he should be there at her beck and call. Anyhu, below are some reactions:

“There’s a very long and tragic history of white people acting as saviors, going abroad and wreaking absolute cultural, environmental, economic, and political havoc. There’s also a very troubling history of white people misappropriating customs and robes that do not belong to them. Budgor seems to be comfortable repeating these practices and then some.

The fact that Budgor recognizes tribal law but feels comfortable challenging it—while claiming she is helping “her fellow-warriors against […] Western-influence”—is disturbing, least of all for the contradiction her practice contains. Perhaps more disturbing is that Budgor regards herself “as a tribe member” after spending several weeks in Nairobi on a self-styled safari and returning to her actual home in the U.S. Budgor seems to be behaving less like a Maasai warrior and more like a white woman writing a book to turn a profit from her romanticized trip to Kenya.” –  Aura Bogado

” I don’t want to live in a world of borders, where we can’t get to know each other’s cultures/traditions. I’m not against her having visited Kenya and taken on the challenge of trying to survive in the bush, a tradition that has typically excluded women.

But there’s something to be said about how African culture – an entire culture – is constantly reduced to a self help program for westerners, especially white people, in media. The book isn’t called, “The Brave Massai” or “40 Days with Massai Warriors.” No. It’s called “My Quest to Become the First Massai Warrior Princess.”

Forget cultural appropriation, forget white saviorism, proclaiming yourself to be a Massai Warrior Princess after working with a personal trainer for 40 days (and wearing under armour while in the bush), when Massai train for years, is at the most basic level, so bloody disrespectful and dishonorable. But let’s not focus on how you reduced an entire culture to a crossfit challenge. Let’s focus on your tribal make up and animal print because that’s what’s going to sell books. The fact that a group of strangers embraced you, welcomed you, gave you purpose – when you so clearly needed it – should take a back seat. Why ruin a good predictable made for TV movie?

I hope Kenyan women respond to her, and white allies in development do too. Cause this is ridiculous.” – SPECTRA Speaks

Surprisingly, the book has received negative reviews even from fellow white Americans both men and women, here are a few:

“… I’m a little bothered by the reasons for her mission to become a Maasai warrior. She didn’t embark on this journey because she had a deep love of the culture and wanted to understand it better; rather she’s a self-proclaimed JAP and someone told her she couldn’t do something. While I totally understand the inclination to prove any naysayer wrong, it didn’t sit terribly well with me that a privileged American charged in to Maasai society to do something for herself, sparked a large controversy within Maasai society, and then jumped on a plane and left them to figure it out.” – Nicole (Good Reads)

“…She really was mostly princess, not very warrior…Even at the end – after her training – she reacted with fear when confronted with potential danger from other Morans who didn’t want white, female warriors. Her preference was to run away, and seek protection from others. Most of all – at the end she says she didn’t change at all. Unfortunately, that came through in the book. Maybe she thinks that means that she was always strong and self-reliant? But, I suspect it really means that she didn’t learn a thing, and has just gone back to her self-absorbed, Ritz Carlton-staying, Louis Vuitton-carrying life. She didn’t even attempt to learn the Maasai language for crying out loud!” – Alice

You can watch the “blond” below or visit her site for more info: Mindy Budgor

Hahaha, did she say she misses her tribe. Dang, this chick should have saved that money and gone to Hawaii or something. How many of you Kenyans miss your tribes? Lol….that will be the day. She even sounds like a Kenyan politician, ati “The tribe asked me…” I know a few Maasai women who weren’t asked, did she speak to ALL Maasais to ensure the WHOLE tribe agreed to have her as their representative? When was the voting??? Nkt.