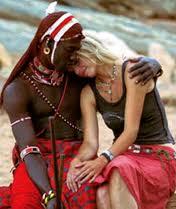 Remember the movie on European Sugar Mamas in Mombasa? (Read the story and watch the trailer here: Paradies: Liebe) Well, although the movie was a hit and a great comedy for many, someone decided to write about the other side of the story. What do the young boys at the coast really think/feel about the Sugar Mamas? The original article was a bit too descriptive but I tried to “brush” them off…..lol….the blog has to remain unrated.

Whoever pretends to be a Maasai at the bars along the beach in Mombasa has better chances with the white women.

Walking along the white sandy beaches in Mombasa it’s rare to meet package tourists as most prefer to lie on sun beds next to the pools in their hotels. On the other hand, you’ll usually meet many white women walking along the beach, most of them as they hold hands with Kenyan beach boys i.e. young boys who live off female sex tourists along the Kenyan coast. Most of these women come from Germany, Austria and Switzerland.

These women come in the same flight as the package tourists but their main goal is to take part in an adventure as they look for love. According to the Chairman of the Mombasa Tourists Association, every tenth tourist from the west takes up the services of a beach boy while at the Kenyan coast.

The newcomers usually fall for the “Maasais” with their red hair holding spears as they walk along the beach. Most  “Maasais” tell of their stories as traditional healers or how they killed a lion with their bare hands in order to become morans. A real warrior, a real dream man to these women. But in reality most of these men are usually from Nairobi and Kampala with little to no idea on being Maasai.

In his article in the Saturday Nation, “When ‘Maasai’ is a Job Description”, Wycliff Muga wrote about how young entrepreneurial young men from Kiambu and Murang’a were making a kill pretending to be natives of Narok. Wycliff heard of the success stories of those who spent the cold winter months along the Kenyan coast and the summer with their girlfriends in Bümpliz or Wanne Eickel.

Most of the beach Maasais are Giriamas who came as members of the many dance groups that entertain guests at the hotels. The young athletic dancers sooner or later realise that performances in maasai costumes produce a completely different kind of response from the tourist than a performance in any other costume and so most of these young men, convert to become Maasais.

From interviewing some of the beach boys, not only do you learn about these boys’ hidden agendas and ulterior motives but those of their partners as well. In most cases these motives and agendas are incompatible maybe explaining the dramatic end to these kinds of relationships.

The relationship sagas of the beach boys and their European partners are very materialistic. Both sides project their stereotypes on the people they meet, one the “dark continent” and the other the “white paradise” which are a distortion of the real picture.

I was Cherry’s 7th husband. Her 6th husband was from Egypt and she had kept his name. Cherry was originally from the USA and was a little bit older than me and had been to Kenya many times before I met her.

I had just returned from the UK where I had done a course on Bar-keeping and was working at a Cocktail bar in Bamburi at the time. That’s where I met her, she loved by my cocktails and drunk them heartily. She was my first white experience. There’s a difference when someone has slept with a white woman because when you have, you can look at a white man straight in the face and say “We’re equals”. (Haiya, ati what???? excuse my comments but some of the comments in this article, wacha tu)

She always got excited too fast. I’m not a beach boy, I’m a mixologist. She loved traditional performances, so one night we went to one of the clubs where traditional dances were performed. Later we left and went to her hotel, considering I wasn’t a registered guest at the hotel, we had to go in through the beach entrance but Cherry didn’t care, she only wanted one thing.

White women constantly want sex. When it was nearing dawn, I couldn’t continue but she didn’t want to stop. It was my first time performing oral sex, I had seen it in movies but had never thought people actually did it. I was at my wits end. She wanted more than I could give.

That same night, she asked me what I wanted. I didn’t have to think long about it, ” I dream of owning a Cocktail bar on the beach”, I replied and she simply answered “Okay”. It was love at first sight.

Back then you couldn’t find well mixed cocktails anywhere in the North Coast. I was the first black Cocktail bar owner at the coast. Cherry stayed for another 2 weeks and before she left for the US, “I want to marry you,” she told me. The fact that I already had a wife and kids didn’t worry her much.  “Polygamy is legal around here isn’t it? You can have as many wives as you please. You only have to give me my share.” So I had to tell my wife who wasn’t pleased by the news but I told her I was the boss and she had to take it.

Before Cherry left, she put $2000 in a joint account at the African Commercial Bank to finance the new venture. I soon found where to locate my new bar, right next to one of the expensive hotels where the international airline crew stayed. They know how to appreciate well mixed drinks. Business at the Shariff Ltd Bar was booming. Soon after opening the bar, some US soldiers who were supposedly fighting in Somalia came over and stayed the whole day drinking quite a lot.

Cherry came back and we lived the “typical African” life without showering and without tapped water. She craved for what she called a “simple and natural” life. For me, it was hard. She was hooked to me and soon after we got married. No sooner had I began to enjoy the success of my new business and attained my independence from her than she lost interest in me. Two days after the wedding, she replaced me with my best friend James.

Apparently she loved James and they had planned all this. The wedding was just a pretence. A few days later she disappeared with all the money from the joint account, I was mad, but solely due to the financial implications.

I met Sonja in a hotel in 1995 in Watamu where she was on holiday and where I worked as a waiter at the time. I was 25 and Sonja was 10 years older. The attraction was mutual but my boss didn’t encourage any relationships between the hotel staff and the guests, so he fired me. Sonja delayed her return to Switzerland and bought a house in Mombasa where we moved in together. She encouraged me to think of a new way to earn a living. I decided to acquire a Matatu. (LOL, ati they call it Buschtaxi na kijeru….aiii).

Sonja made it possible and calculated the Return of Investment to be approximately 4months. We lived well on the Sh. 75,000 that came from the matatu monthly. The parties  we threw were well known and dubbed “Checkpoint of the Happy Few”.

A year later, I found Sonja in bed with a famous beach boy. This led to a fight between me and the guy and the police had to be called in to calm us. A few days later, Sonja came back to the house under police protection. She had made them believe that the matatu, house and all in it were hers.

Today, I work as a waiter at a small hotel. On the side, I’m also a beach boy and I hope I’ll soon meet another white woman who will buy me another matatu. I heard from some friends that the new guy cheated on Sonja and she went back to Switzerland heartbroken.

I was a member of a group of traditional dancers who performed regularly in hotels in the North Coast of Mombasa. Regula was here on holiday. We became very good friends and to my surprise Regula wasn’t interested in sex. I had joined the dance group because I had never gone to school and couldn’t find any other job. My dream was to find a white woman who would take me to Europe where I could get a degree in Business Administration. Regula was very generous and this showed that my dream was close to being realised.

After a month the relationship moved to the next level. One day Regula asked me to take a day off and do something with her. We went out for dinner at a restaurant and afterwards went to a nightclub where we got drunk. We drunk a lot and right before we left, Regula took two extra bottles with her.

When we got to the hotel, both of us completely drunk, she decided she share her story. In tears she told me how she had been in a lesbian relationship for 5 years in Switzerland. Her girlfriend had been mean to her by constantly critisizing her and commanding her around until she had a nervous breakdown. Regula had come to Kenya to relax and forget and so she begged me to “Make her into a woman”.

After a few days she flew back home. She sent me enough money to buy a matatu, then I never heard from her again. She never even sent me a postcard after that.

I met Heidi in 1991, she was from Austria, in her mid forties and recently divorced. I owned a boat which took tourists to the island and that’s where we met. Heidi was getting huge sums for alimony, so we lived in luxury. After two years she took me with her to Austria, and after another two years she sent me back to Kenya. Then I had to fight for my survival, I had already sold off my boat. To my surprise I met Heidi on the beach in the south of Mombasa with another beach boy. Together they had bought a house in Mombasa and lived together but only for a short time. After one year the new beach boy was also kicked out to make space for number three. It’s now clear to me, relationships with white women should only be conducted in Kenya.

The white women presume they like oral sex but in truth they only want to see how we do it because they know we don’t like it. It gives them the feeling that we’re under their control. Do you know white men can live for months only on oral sex? I heard that from many women while I was in Europe.