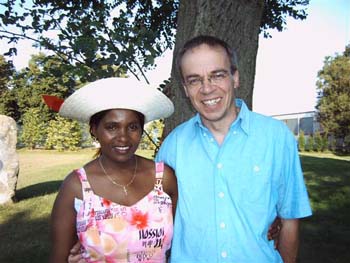 Meet Wangeci and Helmut or as others call him, Njenga or The white Kikuyu. I bet some of you have watched Wangeci’s videos on youtube already. So here is their story.

What dreams we have of Africa – what hope, and illusions and for the Africans it’s even worse. In truth we come from Worlds apart yet so irresistible to one another.Africans and Europeans react completely different from one another. The simple statement “There’s no hurry in Africa”, already shows an attitude towards life that many Europeans don’t understand. Also the living for the here and now of the Africans remains foreign to the Europeans who are fixed on planning for the future always. There’s no larger difference than that of a single German with no kids who worries constantly about his finances and a Kenyan used to living in a huge family that’s part of a larger clan.

For years, Capetown was Africa to Helmut and that’s where he met Wangeci in December 2003 and she became his Africa. Leading to his movie “You are my Africa” (“Du bist mein Afrika”) that talks of a love and harmonization story. He wanted to document the development of his personal adventure; the meeting of two cultures that hardly understand each other yet are able to live with one another. How does a german-kenyan couple handle Africa and Europe? And how does Africa and Europe handle such a couple? The movie aims to answer these questions from a personal point of view.

Helmut lives in Kiel and that’s where they got married after 10 months of Wangeci’s second visit in 2006. They lived for a year with nobody from Wangeci’s family knowing that she wass married to a Muthungu. Helmut went against tradition as he didn’t ask the father of the bride for her hand in marriage nor pay her bride price.

Helmut was until his marriage to Wangeci a single childless journalist and filmmaker. Wangeci was a widow with four children (who live with their grandparents in the village in Kenya). She is the first born in the family of 11 children. She was the sole provider of her family, which she could do working as a trader in Cape Town.

Before the filming of the movie they stood at a crossroad in their love life. They would be travelling to Cape town and to Kenya. In Capetown they’d meet Wangeci’s friends and her 2 brothers. Finally, they’d spend a few weeks in Kenya. They didn’t know how Wangeci’s family would react to the news. Would Helmut be spared the cliché of being a rich mzungu? Would Wangeci’s kids understand that they could not join them in Njeremani? Would the 4 kids understand and accept to only see their mother once a year for only a few weeks? How would Wangeci and Helmut manage these situation?

“A story of happiness and pain, hope and disappointments. A film that tells of my wife and my love story.” – Helmut Schulzeck.

Years after that 2011, Helmut filmed another movie Meine Ferne Familie (So close yet so far). You are my Africa was filmed in 2007. Watch trailer here.

Below is the You are my Africa trailer, but you can also watch another one here.

If you don’t know their original online videos, here’s one: or you can watch this one on their channel.
Share with friends: