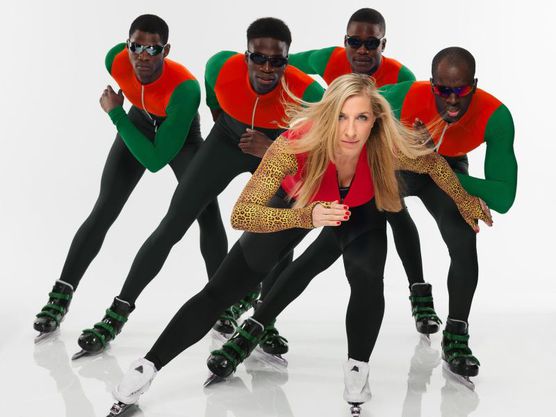 The show has only aired one episode and it’s already being accused of racist stereotyping. The show aired on Tuesday and everyone is against the show. All TV critics have gone up in arms complaining that the show ridiculed the Kenyan men in the show.

At this rate I think German TV should just stay out of Africa based shows. The only show that has never been accused of racism and it involved Africans is the “Strengste Eltern der Welt” and “Frauentausch”….. all others have to be stopped at least by the 5th episode.

According to the TV critics and all those complaining, here are a few things they thought stood out for the wrong reasons

When the guys arrived in their host family’s home, they were given some house rules which were just plain dumb: “We have some rules in the house. First rule: When you come into the house, please put out your shoes and go to your room.” And “Don’t smoke in the house”. Apparently, none of the guys smokes anyways.

On arriving to the other hosts, they are told “Here we say ‘Grüß Gott'”, only for the hostess Oma Hirschbichler, asks “Do they even know of a god?” to which her husband replies, “They are all catholics”.

After a few mishaps with the hosts and the usual German screaming and monolog, one of the guy out of the blues says: “I feel like I’m in paradise”, a contrast to what had just happened before the statement was uttered.

A member of the board of directors of the “Initiative Schwarzer Menschen in Deutschland”, Ms. Tahir Della (51), told the Bild that the show was ridiculing black people although it was done very subtly. “It’s not a coincidence that not a single white person slid and fell on the ice, it’s just not as funny”.

In an interview with the tz, Anni Friesinger defended herself, saying she couldn’t be considered racist: her mother was polish, her husband dutch, her brother is dating an Norwegian and her sister is with a Finish. (Haven’t we heard this excuse enough times already?????? Dear Ms Friesinger-Postma, just because your family comprises of every EU national there is doesn’t mean you can’t be racist. Many slave traders would have black concubines that would bare them children and they would still be sold to the highest bidder at the market…..sorry but that excuse doesn’t float).

Anyhu, in an interview with FOCUS, in her defence Anni pointed out that she chose the guys because they are Kenyans and Kenyans are the best marathon runners and not because they are black. She also pointed out that speed skating wasn’t necessarily a white sport considering the current world champion, Shani Davis is black. (This excuse would definitely fly. I definitely believe she meant well if she explains it like this than by mentioning her whole lineage).

“You have to eat what comes on the table. If you’re hungry, take a wurscht.” Völkerverständigung by Anni Friesinger #realcoolrunnings

So did you watch the show? What did you think?

I find it funny though that everyone is always willing to talk about “racism” on tv shows but no one wants to talk about racism on the streets. The show has four consenting adults who may or may not have been paid to feature and who actually have no problem with what they are being told to do and say. It’s a free world, and if these guys think it’s fun being ridiculed, then let them be ridiculed. Instead let’s move this discussion to things that actually matter and affect people who can’t do much about it like: CVs being thrown in a bin because they have a black face; or 90% of black children born and bred in Germany never making it to an Ausbildung or University; or the number of black people attacked by the police for no good reason……..NKT!!!! We can make it a HUGE issue right now about this show, but it doesn’t change much if people are still being treated like lesser beings on the streets. Because guess what, there’ll be a new TV show with the same stories anyway.