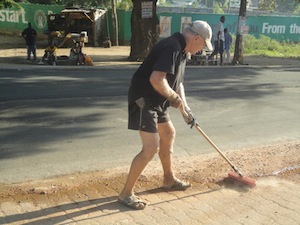 Detlev Janthur born in 1952 in Stuttgart in Germany moved to Canada when he was 11 with his parents before the whole family changed nationality to become Canadian. He trained to be a visual landscape architect and worked at that until his retirement. His passion for the keeping the environment clean has taken him all over the world and won him many awards.

His day starts at 4am when he cleans his own compound before he proceeds to clean the streets on Ukunda. His motto is you start with your home before going to the outside. He also talks of Kenyans’ love for saturated fats that are always packed in small polythene bags that they always litter all over. He insists that this isn’t a hobby, environmental conservation should be taken seriously. He urges Kenyans to follow suit and keep their environment clean.

He says Kenyans are very friendly and although due to the culture most will not come out and say it to his face, he knows many think he’s insane.