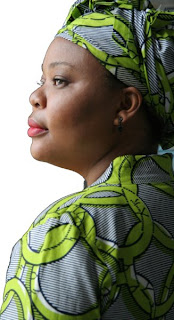 Leymah Gbowee was recently in Mönchengladbach, Eva and I decided to go listen to her speech or whatever she had planned for the evening. There was drama trying to get there but we finally did and attended the speech.
If you have watched Leymah, you’ll know she’s very passionate about Africa and talks openly about wars and crimes committed against women during wars. She’s an amazing lady and has a great sense of humour.
During the event in Mönchengladbach, her talk titled, “Unpopular but progressive”, spoke on the need for people to look towards doing what is right, rather than doing what people like. She encouraged more people to be couragious enough to speak when wrong was being done, even if that would be considered an unpopular move.
If you haven’t watch the documentary about the war in Liberia “Pray the Devil Back to Hell”…it’s an amazing documentary. Truly shows the power the people have. Politicians, rebels and militias are a small group compared to the people.
NO ONE should be allowed to hold any country at ransom for their own personal intentions. It’s the role of kawaida wanachis like you and me to make sure NOBODY misuses our country.
Share with friends: