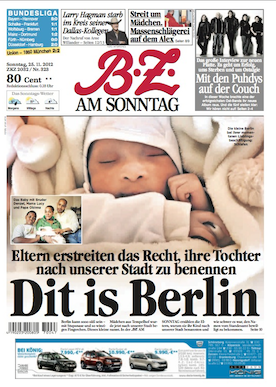 It’s the first time a child in Germany is to be named Berlin after the capital city. The Kenyan-Nigerian couple based in Tempelhof was set on naming their child after the capital city, with the father saying he wanted to name the child after “the city that brought them happiness”.The 45 year old Nigerian, Obinna met the 35 year old Kenyan, Lucy  5 years ago in Berlin. Lucy had gone home to Kenya on holiday where she met Obinna’s brother who at the time lived in Kenya. “I have a relative who lives in Berlin that you have to meet”, the brother insisted when he met Lucy. And as they say the rest is history.

Beginning of this year, Lucy got pregnant and wanted to name the child Berlin but the Standesamt wouldn’t let them, citing that it was hard to differentiate between whether the name holder was male or female. So the family went out to research and found out a case that was ruled in Berlin a few years ago where a family was allowed to name their child London. On presenting this to the Standesamt they agreed to register the baby as Berlin. 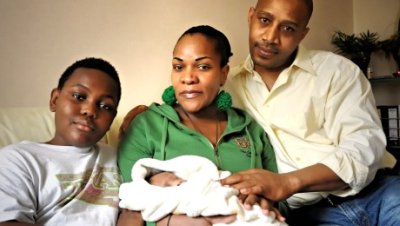 The baby was born in October 12th, a few weeks early but very healthy. On 9th November, the baby was officially named Berlin. A bit late but better late than never. As of tradition, the baby also got a second name, Odera meaning luck.

PS: I went to school with a chick called Berlin, and it never sounded weird. Do you know anyone named Berlin???

And this issue of them not knowing the gender….puuuuliizz, that vowel rule doesn’t work even here. I get enough letters addressed to Herr Mkenya (of course Mkenya isn’t my official name, but I just might try to change it, what do you guys think? Frau Mkenya Ujerumani)

Anyhu, have a blessed week ahead.