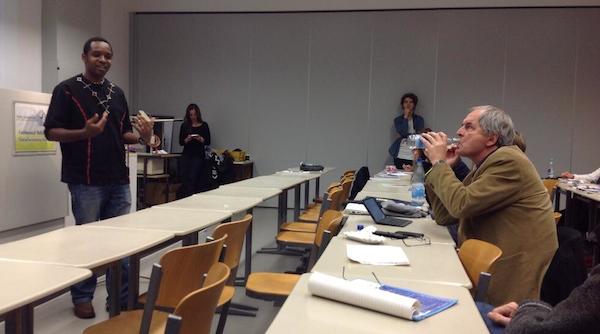 Boniface Mwangi was in Berlin on the 12th of November to deliver a lecture titled: “Awakening Kenya: Challenging yesterday’s political identity”. As always he did not disappoint speaking from his heart and making sure he said all that needed to be said.

He took his listeners through the political history of Kenya from independence and the subsequent taking over of Jomo Kenyatta as the president of Independent Kenya to the failed promises of the Kibaki regime and eventually the election of two ICC suspects as President and Vice President.

Boniface was blunt with his observations, telling it as it is/was instead of sugarcoating his thoughts, from comments on how Jomo Kenyatta was a poor herds boy, who became a billionaire just by becoming president to challenging Germany’s political identity and calling to an end to aid in Africa. Jomo Kenyatta’s oppressive reign wasn’t forgotten either, apparently Jomo ruled the same way the colonialist had done it.

He also pointed out to the Europeans that they should stop trying to solve the problems in Africa and instead focus on their own problems, as they to also have problems, so as to allow Africans/Kenyans to solve their problems. African solution to African problems.

Boniface condemned the cowardice displayed by his generation, going as far as laying blame on their parents for “Raising cowards” and terming the generation as “too afraid to challenge authority”. This he attributes to the Moi regime, a time in Kenya where potatoes and even cows were named after Moi.

Other Kenyans weren’t spared either as he called us “slaves to their master (politicians)” for constantly “voting along tribal lines” instead of “for the good of the country”.

Boniface called for change in our views of authority and even politics. He agreed that change was not something that could be done over night but implored that we at least start the rolling the ball. He called for the change in the rules of politics, calling the current rules “dirty”. According to him, bright minds and people of good morals would only get into politics if the rules were cleaned.

He didn’t forget to mention our dearest Afrocinema friends in his lecture by pointing out that, “Kenya and Nigeria had a lot of bad things in common”….

If you missed the lecture, you missed an amazing time with this guy. He’s definitely a different character to the “Ndio baba” characters we are used to.

He left shortly after the event on Wednesday morning for Mexico according to his Tweet.

Goodbye Berlin. Off to Mexico but l have to fly to Netherlands then to USA to get my flight to Mexico. 20hrs on airports/planes.