Well, unlike last time when an artist came to Germany and sent his comments to a paper which  he later refuted. Kidum in a video released by the organisers of his German tour, declared his time in Germany as AMAZING. In the video, he said he was pleasantly surprised by the reception he received in the three cities he performed in. According to Kidum, the Kenyan crowd in Germany jammed the show like nowhere else and he promised he would be back.

The Nation in Kenya though, wasn’t as kind. Without mentioning sources of their information, they reported that the show in Berlin was disappointing to most Kenyans. The paper sited that, ” no one seemed to know when exactly, where exactly, how much or even what time.” Well, according to the poster which was written in English, the details were pretty visible: 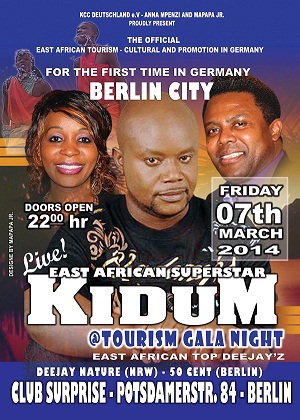 Those who attended the show, were well entertained with many promising to attend any future parties organised by the duo of Real Mapapa Salim and Anna Mpenzi. Pictures circulated on the web, show most of the attendees booging and enjoying Kidum’s performance in the nation’s capital. From the feedback, Anna Mpenzi and Real Mapapa Salim, remain the most innovative events organisers in Germany. They are the only organisers who have been able to pull of a “country” tour for any Kenyan musician. Albeit they only had Kidum in three cities (Berlin, Frankfurt, Munich), the cities cut right across the country allowing people from other cities to travel to the city closest to them. Most Kenyan organisers to date have only been able to bring a musician to a single town.