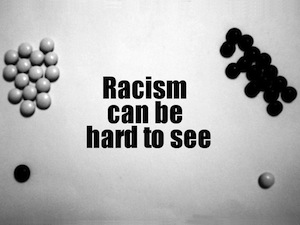 We’ve had stories from racist attacks to racial discrimination but in those discussions people always try to look at the situation in a different light to show that it might not have been racist after all. But who decides when something is done based on race and not on a million other factors?

When the Nelly, a Kenyan Lady in Vienna was pushed onto the rail tracks and almost died from it, many argued it was a racial attack because the man who pushed her and his girlfriend both made racial slurs. When they got to court though, the judge ruled that it wasn’t a racial attack. The guy apparently could not be racist as he had dated and even married a woman from Russia and his current girlfriend was from Italy or someplace else.

When Oprah tried to buy an expensive bag, she was told it was too expensive. When the owner of the shop was asked to comment on the matter, she said the sales attendant had done the right thing because the bag was behind a glass cabinet and that was a safety measure. Some people online argued that in some classy shops even white people aren’t allowed to touch things considered to be “too expensive”. Some argued that Oprah was dressed down when she went shopping thus the snob she got.

When Jimmy the Kenyan in Berlin was attacked at a night club, albeit the attackers calling him a nigger, it was argued by some that they guys were just drunk and didn’t know what they were doing. They were just making merry as they ushered in the new year. (Who makes merry by almost turning another person blind?)

So who really decides whether an occurrence/term is racist?

Racism is defined as- the belief that all members of each race possess characteristics, abilities, or qualities specific to that race, especially so as to distinguish it as inferior or superior to another race or races‘

After the Trayvon Martin ruling, someone gave a magnet analogy on how racism works and I’ll share it:

If you had a magnet on your neck you’d see the world very differently from those without magnets. First, you’d be surprised how many items contain metal things you were completely oblivious to before.

Racism works the same way. If you’re black, you feel it but most white people will argue it doesn’t exist. How can you convince them there is metal in the world when they have no magnet that attracts metal to them?

Although some of us might argue, it is better to be white even back home where they tend to get better treatment than natives, they will still argue that they are disadvantaged there because they are in the minority. Is the fact that a white person can’t go to River Road freely not a form of racism?

I think this would also bring about the discussion between positive and negative racism. When people see you as a black person and assume you need help and they go out of their way to help you, isn’t that positive racism? When a white person walks into a hotel in Africa, and they are served before all the black clients who’d been waiting, isn’t that positive for the white person at least?

Is it that easy to define what is racist and what isn’t? How would you pick out just another fool from a racist? Or are they the same?

Still on that, watch this video and let me know what you think.