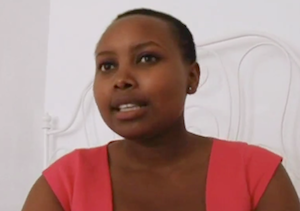 Her name is Lina Samba, she’s 17years old and lives in Berlin. She doesn’t explain how she got to Berlin but says it was a horrible experience. Her wish is to become an actress or artist in Germany.

I hope you didn’t think I had an answer to the question above but I’d like to hear from you guys, how does a 17year old child from Kenya become a refugee in Germany? This isn’t Somalia or Tanzania or even Uganda where a child might have wondered away from home only to find themselves across the border, so how does a 17year old, think up to travel 6375km to seek asylum in Germany? How did they get into the country? Who paid for their flight?

My worry is this girl was brought here by a relative and in worst case by a parent. As in muss es sein? This is a 17year old who was plucked out of a society she understood to come and “fight” in a society she has no idea about. At 17, assuming she came this year, she was most probably in Form 3 right before her Form 4 exams. I can almost guess she’s in a Hauptschule because of the usual excuse: foreigners need to learn German in a Hauptschule before they can do anything else. With a Hauptschulabschluss, her chances of venturing into most fields drops to zero. I bet you’re thinking but she wants to be an actress, well if she doesn’t get herself into the set of one of those RTL shows, most other acting jobs in Germany require that you at least have an ausbildung in the field.

Had she completed her Form 4 in Kenya, she’s already considered to be having an Abi depending on her grade. If it’s above C+ she would have joined a Uni here. Below C+ depending on the city she applies the conversion for it would be at least a Realschulabschluss and at worst Mittlerereife which would be enough to do most ausbildungen. (Read: German Education System Simplified)

Also, her application hasn’t been accepted so as in most cases she might be waiting for her “makara” for another couple of years. Next year she’s 18, meaning after that she’s no longer forced to attend school. When she’s done with school and her application hasn’t been accepted yet, she won’t be allowed to work or even do an ausbildung. At 18, she’ll also nolonger be allowed to live in the cozy home offered by the organization that’s currently housing her and she’ll be forced to move into one of the refugee camps.

My question is, is it worth it? Is destroying a child’s future worth the “makara”? Why can’t people just do things the right way and make decisions based on the long term effects?

Another scenario that has also become common with the Kenyans here, is adults registering themselves as children. May be this girl is waaaay over 18, but as I heard, apparently those methods they use to “calculate” or “test” for age, don’t work very well with our bodies, meaning most of us would pass for much younger than we actually are. However, if these people end up getting a job e.t.c and they have to go on retirement based on the fake age, si they will have to work much longer than the “kawaida” folk, ama that doesn’t matter?

PS: I don’t know the lady nor her story, but I know a couple of people contemplating bringing their relatives or children to Germany through such ways thus the post.

I’d love to hear what you guys think about the whole issue, not just about this girl but generally about this method of “inviting” relatives to Germany.