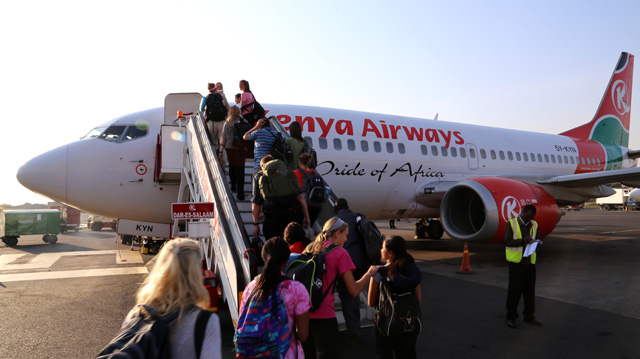 Have you ever wondered why fathers, uncles rarely have a problem when they apply for visas to Germany yet mothers, sisters and brothers seem never to get them?

I’ll play the devil’s advocate here. I featured two articles by Kawira an Open Letter to the German Embassy and May I Please Christen my Baby; both which came from the side of a relative frustrated trying to get a visa for a relative in Kenya to come and visit Germany. Of late, the Kenyan Embassy has refused to issue visas even to people who have been coming to Germany for years, but have you wondered what role we have played as Kenyans in Germany to make this happen?

There have been many crazy stories that would give the Embassy enough reason to deny people visas to come to Germany. We know Germany is a schublade society, and when one person does something then everyone with the intention of doing it is assumed to have the same motive. I’ll share a few cases:

Three sisters had invited their mother to come to Germany on holiday for three months. When the woman got here, they (the daughters) wanted her to stay here for good. Their plan was to have their mother married off to a German and stay here. When their mother refused, they hid her passport to prevent her from returning home. The woman who was from Mombasa, fell ill due to the winter cold and had to be rushed to hospital. The daughter who was hosting her took her to hospital before packing and leaving on holiday. The woman couldn’t speak and German and was only able to communicate in swahili and very little english. When the daughter who had brought her couldn’t be reached, the hospital officials called the migration officials who ended up getting emergency travelling documents for the woman to return to Kenya.

A Kenyan lady invited her mother and younger sister to visit. When they arrived here, she took them both to the asylum camp to seek asylum.

A woman invited her 19 year old son from Kenya on holiday. She didn’t want the son to return home. She told her husband who had signed the Verpflichtungserklärung that the boy had gone to visit relatives in Netherlands, then she organised for her son to go to the asylum camp and declare he was a mungiki. May I add the guy is now close to 34, and he’s still in the camp.

A lady invites her sister, after the holiday the sister goes to the asylum camp “anajipeana”. The 26year old sister declares she’s 17years old and she was being abused in Kenya thus can’t return. The bone testing matches her to her age. She’s enrolled at the Hauptschule close by.

A lady in Austria was demanding Ksh.100,000 from a nephew living in Kenya to bring him to Germany or Austria to become an asylum seeker.

The cases are numerous, but the story is usually the same: women are brought here and instead of going home after their visa expires, they rush to Denmark to get married or go ahead to seek asylum; for the boys/men, they are taken to the asylum camp. But why are WE doing these to our relatives? Why are WE doing this to our fellow Kenyans?

There is a women’s group in Köln that helps people bring their children to Germany. Expecting a group like that to actually have the right procedure in place, their idea is to bring the children on holiday visas then take them to asylum camps.

If I invite a relative and they don’t return home as planned, I automatically spoil the chance for numerous Kenyans who are inviting their relatives for genuine reasons. A few years ago, parents and relatives were allowed to come to Germany for weddings, graduations, naming ceremonies and even for holidays without an issue. NOW even with a letter from the University confirm you’re graduating isn’t grounds enough for your mother to get a visa.

We’ve become notorious, even the annual Conference for Churches that is held in Hamburg has stopped  inviting Kenyans: in 2012 they invited 200 people who all got visas but only 50 returned to Kenya after the event; in 2013 they invited 50, only 5 got visas. Is it really fair to do this to others?

And this isn’t peculiar to “kawaida” wananchi, even our government officials seem to have been bitten by the bug. MPs, Senators, Ministers, County reps, name them. They are invited for a workshop or training exercise a few days or simply a week, when they land here they suddenly realise they want to visit relatives and would like to stay longer. Some will simply overstay, while others will start fighting to have their visas extended at the last minute. Others that’s when they realise they would love to visit the US, Canada, UK, using the German visa.

As you plan on taking your relatives to asylum camps or as you enjoy your life in Kenya and a relative promises to bring you to Germany to seek asylum, think about this:

Remember, the only difference between the refugee camp in Dadaab and the asylum camps here in Germany are the names and the fact that the German ones are physical structures either shipping containers converted into homes or huge houses that look like dorms. All the rest is pretty much the same. Ask yourself if that is the life you are after.