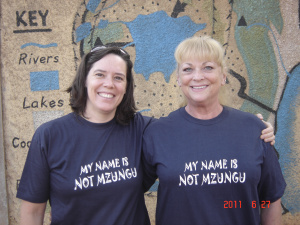 During the hulabaloo of publishers in Germany deciding to remove the word nigger from all books (Read: Word Nigger to be removed from Children’s Books). One of my German readers sent me a message, saying the use of the word mzungu towards most white people felt to an extent the same as using the word nigger in reference to a black person.

I have never been called mzungu or nigger so I can’t write much on personal experience so I chose to use information from those who’ve experienced use of these words and see what they felt about it. But, I’d like first to explain the two words and their origin.

Mzungu comes from the Swahili words zunguka, zunguluka meaning mtu anayezunguka or azungukaye. Originally used in reference to traders who would move around from one area to another, what the white traders did unlike the Arab traders who sold their wares at the coast without coming to the main land.

The word though has evolved to also mean the oga at the top (lol…had to say that), or the Boss (in Uganda). Generally, people use the word to mean something good. You’ll hear people say, Anaringa utafikiri ni mzungu (They are so proud, you’d think they are white) or Hawezi guza uchafu ni msafi kama mzungu (S/he can’t touch dirt, s/he is as clean as a mzungu).

Nigger (Neger) on the other hand sets its origin on skin colour, as it was a variation from the latin word niger for the colour black. The term was generally used to refer to slaves and later escalated to become an insult.

I would argue that the origins and even the intentions of the two words already set them apart, but it seems some people disagree.

First is an American who was in Tanzania as a volunteer who says:

A few times a week a volunteer like me, (…) is approached by kids or grown-ups (usually kids) who hold out a flat palm and demand in a hard voice, “Give me my money!” (…) a) we don’t have much – we’re volunteers, remember? – and b) we might get mugged. Our standard response is to imitate them: we hold out our hands and say, “You give me my money!” But it never does any good. The habit of expecting money from mzungus is engrained in their culture. Somebody taught them this, and that somebody is not going to teach them otherwise. (…)

They shout harshly at my back after I walk past: “Mzungu! Mzungu! Ay, mzungu! ‘Zungu! MA-ZUNG-U!” These are not hostile greetings, but neither are they friendly; locals speak to me on the street in exactly the kind of tone you might use with a disobedient dog named Mzungu.

Our natural first reaction is to think, “Would you like it if you were walking down the street and I yelled ‘hey, black person!’ at you? Because it’s the same thing.” I want to inform these people that I do have an actual name, and it is not “mzungu.” That word’s definition encompasses, in my opinion, only a small portion of my identity – but to them, it’s all I have to offer. For this reason and for the manner in which it is often delivered, I’ve come to find it offensive (…) “mzungu” definitely crawls with shades of not-so-nice connotations (…)

Frankly, I have never in my life been on this end of racism and I hate it. (…) I understand that people with so little might feel resentful of people with so much that they can afford to give it away, who can afford to work for free…. Read the whole article: Tired of being a Mzungu in Tanzania)

One of the comments to this article, is a lady also from the US who went to Kenya and she says, for her she simply calls the locals, “Kenyan” then asks them “Are you stupid?” or retorts, “God back to school”….lol….I found this funny. I always find it funny when an American tells anyone to go back to school, seriously?

This is just one of many other views on being called a mzungu. But this article has also raised another issue that many of us rarely think of. Why do people in Africa keep begging for money from white people? Who taught them?

I have enough points to argue against the article above but I’d like to zone in one 2 statements she made: “But it never does any good. The habit of expecting money from mzungus is engrained in their culture. Somebody taught them this” and “I understand that people with so little might feel resentful of people with so much that they can afford to give it away, who can afford to work for free”

First of all, from my opinion, white tourists taught us (Africans) to expect hand outs from them. The westerners have for a long period behaved as the Messiahs of the Africans, thus the aid, the charity organizations and the thousands of volunteers who “sacrifice” their lavish lifestyles in Europe and America to go save the “bush” people. Towns where people are used to seeing white people, and poor white people, you never find people being fascinated by the white skin.

But I digress….back to mzungu vs neger.

Another blog article I found was one titled My Name is not Mzungu (also the source of the picture above) where the writer explains 2 extremely important points, 1. Mzungus are to be Respected and 2. Mzungus are rich. Although irritated by being called mzungu, they know most people never really mean any harm.

Anyhu, I’d like to know what YOU think about this whole issue. Feel free to express yourselves, you might expose a dimension I’ve never thought of.

Do you think the two have the same connotation? Do you agree with the article above? Is racism only when a white person talks badly against a black person? Are black people more openly racist without any repercussions? Please share your views below, you can write in German, Kiswahili or English, whichever language you’re most comfortable in.

Is there Racism in Germany?

Who Decides What is Racist?