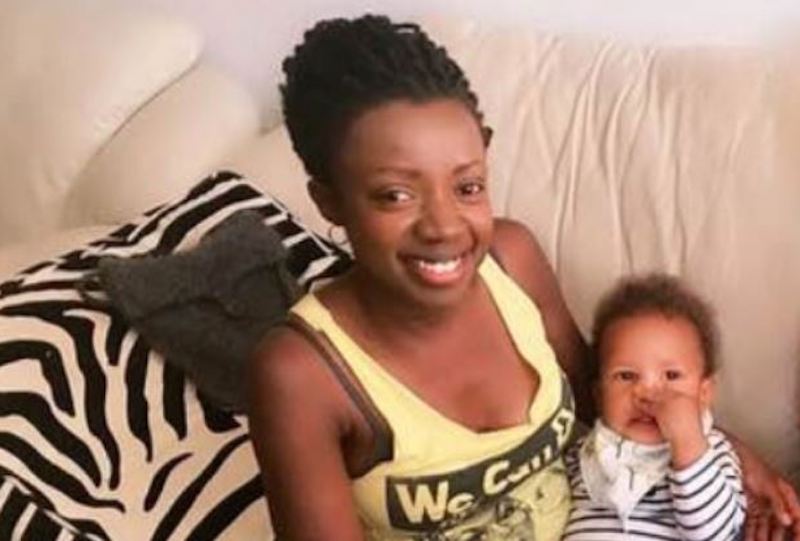 A Kenyan woman and her son were found dead in an apartment in Gentofte near Copenhagen, her husband was the first to alert the police when he allegedly got home in the morning and found the bodies. The first reports by the police considered him a suspect but he was later released and the police concluded that the lady, Fridah “Rashidah” Shirony, had killed her son, Kwanza before committing suicide.

However, many of Fridah’s friends don’t seem to believe that her husband is innocent. Behind closed doors DMs, Whatsapp messages and inbox messages, many agree that even if he did not kill her himself, his cruelty was definitely what led to her death.

Mental abuse, meanness and cruelty are just part of what friends have come out to accuse the husband off.

Elizabeth Gray, a friend to Fridah has taken to her blog to openly share her views, which I’ll share below:

For the duration of our friendship, Fridah had always told me that her husband was cruel to her. She called him insensitive at best, and actively malicious the rest of the time. She told me how her family had begged her not to go to Denmark and how her leaving had caused an irreparable rift in their relationship, and how her husband had never acknowledged this.

When I visited her home, I noticed there was nothing whatsoever to suggest an African might live there. Although I said this in jest (what evidence should there be? A hot bowl of joloff rice on the counter?) she admitted she was not allowed Kenyan things in the home and that her husband had control over the apartment’s décor, which was classically Danish.

Later, when I showed her photos of my new flat in Glasgow she gushed about my little African details – A Moroccan mirror, Ghanaian textile-covered cushions, a copy of a book by a Zimbabwean author – and how “homely” my colourful flat looked in comparison to the typical all-white hyper-modern Danish apartment.

She was clearly uncomfortable there. I never thought much of the fact that he never came to her social events or met her friends, and I only met him once at their apartment, where despite her extravagant efforts at a “special occasion” Kenyan lunch, he ate his own Danish food and left us to the buffet of African dishes.

We had some fantastic times in our friendship, but the memory of her sadness now pollutes them. There was a party at Retro Café on a Friday, and I was hosting a dinner party on the Saturday, and I remember with clarity her apologies that her husband would only allow her to go to one. She chose my dinner party. [As] She stood at my window and looked out at my garden, listening to the jazz coming from the Greenhouse Café in the grounds. She said she felt so at peace, and didn’t want to leave.

She would tell me I made her feel “more at home” in Denmark and with me she knew she wasn’t insane for believing things should be different in her relationship. I agreed with her that her husband’s behaviour was unacceptable. I was with her when she bought herself a wedding ring – he had never given her one – and she told me she was happier to look at it and think of me instead of him.

The last time I saw her was a year ago today, when I visited Copenhagen after the Oslo cruise. We had been speaking online more and more frequently and I was worried.

She was telling me to go and explore the world and never get married, to enjoy my youth because she felt like her life was over, that she wished she could come and work for my family as an au pair, that she wanted to walk away and never return, that if she could do it all again she’d never leave Kenya, not for anything or anyone. There was nothing I could say. I didn’t know to what extent she was being controversial and outrageous with her extreme statements, and to what extent she truly felt trapped.

I was almost reassured when I saw her due to her laughter and happiness lighting up the café. We went for a walk with her baby around the lake. She proudly introduced me to her neighbours and told them I was the first person she told about her pregnancy. I was surprised – I hadn’t known that. I started to wonder if I was one of her closest friends, and how that could be when I lived abroad in Scotland, because surely a young woman with so much positive energy would have a wide network?

The next two times I visited Denmark, she was unable to leave the house due to looking after the baby alone. I couldn’t see her. She was furious at her husband for keeping her stuck at home when he went off to play golf or sit at the pub, at how she was always alone with the baby. “You know,” she said to me “when I get home from work he passes the baby to me as soon as I am in the door. Before I even take off my shoes and coat. Sometimes I am not fast enough and he drops him on the floor.” I was horrified.

I told her to call the police and leave him, immediately. She said she had read stories of foreign women losing custody to their abusive Danish husbands and being deported. She began to believe, whether rightly or wrongly, that Denmark did not care for an African immigrant woman whatever might happen to her. Living with him was, she supposed, the price she had to pay to be in Denmark with her baby. “He threw his cutlery at me tonight at dinner” She told me, “I haven’t told anyone else. He got angry at me because I didn’t know the answer to something he asked me”. All through these alarm bells, she brought happiness to the friends in her life. But it wasn’t enough.

Sadly, Rashida and her infant son were found dead in their apartment on Saturday morning at 4am. The day before, she posted on Facebook that she couldn’t deal with her husband any longer – she had found out he was cheating. She posted details of his manipulation and gaslighting. She had the evidence to leave him and stay in Denmark with her baby, but she never got the opportunity. She wanted to see the world, yet she spent the last few years of her life locked inside an apartment, isolated and ignored.

Danish police are investigating her death, and currently suspect foul play. While her husband has posted that it was suicide and he is not to blame, I don’t believe this. Even if it was, he is culpable. In fact, the entire system is culpable. Denmark, becoming increasingly closed to immigrants and more far-right in their policies, is complicit in her death. The idea that her life as an immigrant woman had less value and that she, as a non-Danish mother, had less rights to her child than the Danish parent, contributed to her belief that he was powerful and she was powerless.

Whether he struck her himself or not, that’s what killed her. Despite this, he has not been arrested, and we her friends are compiling as much evidence as we can of her timeline and her conversations with us that might help shed light on how such a bright girl could meet such a dark end.

While we reflect on our time with Fridah, we can learn from her so her death might not be in vain. We can remember her when people mistreat us, and recognise that we deserve better. We can notice the warning signs and know when to leave.

Justice would be the newspapers reporting the facts and not speculation: current articles in Denmark admit they do not know what happened but suggest “it’s not unusual for women to snap and kill their children in a rage” or that foreign women are known to feel depressed due to their “failure to integrate” or that she might have had “postnatal depression”. Fridah did not fail to integrate. She was fluent in Danish, she worked in a coffee shop, she had a Danish child and Danish friends. She did not suffer from postnatal depression, because from the moment she found out she was pregnant she was solely devoted to the bond between her and her son and the happiness that brought her.

What can we do to bring her justice? We can share her story. We can remember it. And I am going to do what Fridah herself would do, and I will tell everyone, even when it is controversial and offensive and opinionated. Especially then. I will honour her refusal to keep silent – her bravery in talking about her situation.

I will bear her image as a reminder of all of the beautiful and bright things we must fight for.

Article first shared by The Lightness. You can read it in its entirety at: https://thelightness.wordpress.com