Last week, Chimamanda Ngozi Adichie, had a week long book reading tour in Germany and Switzerland. The tour was to promote her book Americanah which was recently translated into German.

We had an amazing time with her in Cologne, but seems the people in Berlin didn’t have such a great time with her.

Those who took part in the event in Berlin felt they were short changed, here’s a short recap from someone who attended.

The event was really short and to be honest, the fans were disappointed. The organisers started 30mins late and did not make up for the lost time. The open session for questions was only restricted to 10 mins  But the fans had enough time to have their books autographed and small chat with Chimamanda.

The German moderation killed the whole event! Let me be honest, she just read 2 pages, then the German colleague read 2 pages in German…. Afterwards the moderator, who was a journalist from Hamburg, did the moderation, asked her 3 long questions, that took up most of the time because of the translation, which the lady journalist was doing by herself.

We ran out of time, only 3 people asked questions. The event started on a sour note: The moderator (i forgot her name) was translating Americanah and she used the word,” RASSE” twice, until one member of the audience rudely shouted,”We do not use the word RASSE!!” It was quite a rude interruption because there was an air of embarrassment for the journalist and people were shocked at how rude the comment was shouted at the commentator (the person who corrected it didn’t even give an apology or an alternative for the word “rasse”…and it was a black guy from one of these Black associations in Berlin. So Chimamanda in an effort to save the journalist’s face, asked “So what is the name you guys use to refer to race here in Germany?” 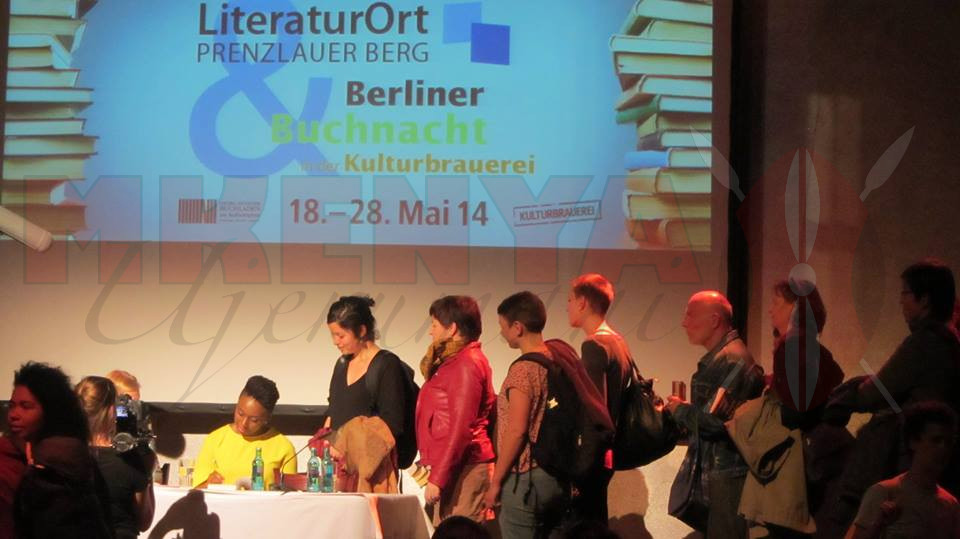 And nobody had an answer, so they proceeded to use the word RASSE but in ” quotes” as suggested by Chimamanda herself…one could tell it was an uncomfortable topic to bring up especially with these dreadlocked activists “Schwarze Menschen Initiativ, Black Germans e.V, AFROTAK, ADEFRA ” around….these guys to me looked like they were ready for a arguements LOL

So to those that didn’t get to meet her, or attended but were short changed. Here are a few videos from our amazing time in Cologne.