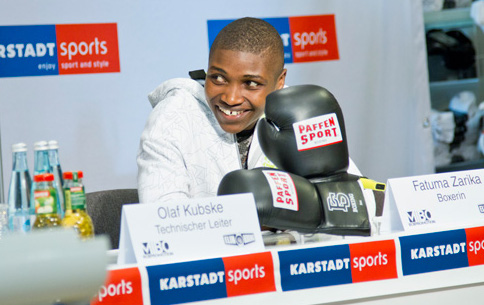 Featherweight Zarika Njeri alias “Fatuma Zarika”, a well known Kenyan boxer, will be fighting in Frankfurt Oder tomorrow Friday 6th Dec from 7pm. You can watch the live show online at ran.de, MyVideo.de or on the ran-App. She has fought in Germany once before in 2006, where she fought against Ina Menzer, although she didn’t return home with the belt, she held her own quite well that there was no clear winner.

She was born in Nairobi, Kenya, on 13 March 1985. She grew up in the Mukuru kwa Njenga slum before she moved to Mathare North after her mother passed away. Her interest in boxing began when she watched Laila Ali in the ring, the thrill of seeing Ali punch opponents to submission drove her into boxing and she started training at Mathare 4A Gym under coach Oksimba.

She started as an amateur in 2000 and in 2001, she turned professional and there has been no stopping her since. She’s fought the likes of Conjestina (Kenya) and Bettina Csabi (Hungary).

“Kenyans are yet to see such a talented female boxer,” says trainer Julius Odhiambo, who works with Zarika at Pal Pal Gym in Pumwani, Nairobi. “She has good footwork, quick jabs and she does not let down her guard. She is a very intelligent boxer and knows when to feign, when to lunge and when to unleash that killer punch. Unlike other women boxers at Pal Pal Gym,” Odhiambo adds, “Zarika works out with men and she trades blow for blow with the likes of David Kiilu, Joseph Miyumo, John Nguru, among others during sparring sessions.”

Her future plans do not include marriage any time soon. “That is not my priority at the moment. My ultimate goal is to win a world championship belt and box against renowned fighters before thinking of settling down with a man,” she said.