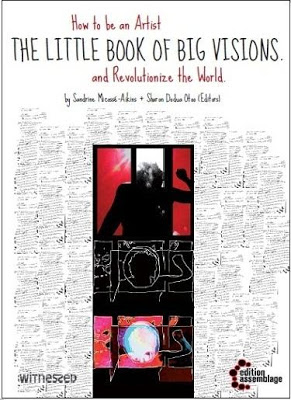 The book titled “The Little Book of Big Visions: How to be an Artist and Revolutionize the World” is a collection of testimonies in English on being Black in Germany. The testimonies which are both fictional and non fictional are edited by Sandrine Micossé-Aikins and Sharon Dodua Otoo originally from the UK. It was released in September and was featured at the Frankfurter Buchmesse.

These stories are a part of a larger project known as Witnessed (read about it here). This project aims at creating dialogue and also sharing information about being a Black Artist in Germany. The book is in English to ensure it can be shared with others outside Germany who’d be interested in understanding about Blacks in Germany and/or Afro-Europeans.
Synopsis of the book:
Black artists in Germany find themselves – necessarily – in a position in which subversiveness and resistance – implicit and explicit – become essential strategies to be used in their work if they wish to survive in this predominantly white context. However, after resistance is no longer necessary, what could be the vision then? And what is the central role of the artist in shaping or creating these visions?
This book contributes to the discourse firstly by providing a contextual discussion of the current situation of Black artists in Germany, and secondly, by reflecting on the question of how contemporary Black artists in Germany create and convey visions of equality.  The methods used to engage with these ideas, concepts and questions are partly in written form (fiction and non-fiction), and partly in visual form. This results in an innovative work focusing on the visions of Black artists in Germany.
“The Little Book of Big Visions: How to be an Artist and Revolutionize the World” is aimed primarily at Black cultural producers living and working in Germany as well as those who reside in English-speaking contexts throughout Europe, UK, US and beyond. However, this book is also aimed at everyone who has an interest in ensuring that the contemporary art scene in Germany finally begins to be truly reflective of its actual and future population.

You can order for the book here: Bestellung
Or visit their Tumblr page: The Little Book of Big Visions Tumblr

You can watch the editor of the book, Sharon Dodua Otoo, below during the launch of Witnessed.