LASCANA recently had a competition that saw thousands of girls apply to feature on LASCANA’s 2014 Calendar. Only 12 made it out of the thousands and one of them is the Kenyan beauty, Joana A..

Joana born and raised in Germany to a Kenyan father and a German mother, is an air hostess with Lufthansa having studies Psychology at the University. At 21, she’s such a beauty with amazingly well kept skin, which she attributes to her good genes and good care. “African women are very confident about their bodies”, she told the LASCANA press team. 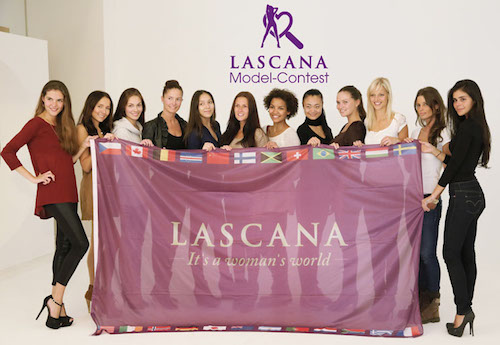 The winners of the competition were in Austria for the shoot where they met with some of the who is who in the modelling industry including, Sara Nuru, originally from Ethiopia, who won Germany’s Next Top Model in 2009 and is the current face of LASCANA and Dayan Kodua from Ghana who was the first black Miss Schleswig-Holstein.

Although the competition aimed at having a calendar that showed different faces of the earth, to me it seems they picked the same “sample” of girls. As in the only difference between all these girls is their hair colour, the one Asian stands out because of her eyes but the rest all look alike. Joana does look “different” when she wears her hair but when she’s in a weave/wig or straightens her hair then she’s just one among many.

LASCANA is a German lingerie and bikinis company. It’s owned by the Otto GmbH and was started in 2006 to provide inner wear for women by women.