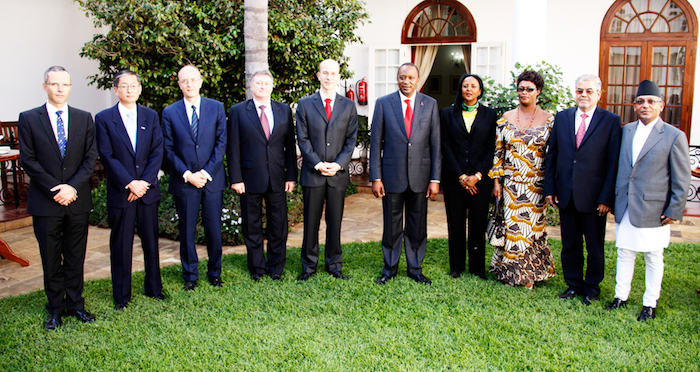 If there was a war, it’s over. If it was a busy schedule, then a time was finally found.

On Monday, 2nd Dec 2013, President Uhuru finally received the credentials of the German envoy for Kenya, Andreas Peschke (Read: German Ambassador to Kenya revealed). Amb. Peschke, arrived in Kenya in October and had not been accredited to date.

According to the PSCU, The President said his government appreciated the bonds of bilateral relationships with the various countries, and would work closely with the envoys to foster the friendship. He welcomed the envoys to work with his Government in all aspects of development for mutual beneﬁts. “Kenya appreciates the bilateral relations between us and your respective countries. We look forward to working more closely to strengthen the bond of friendship for the next 50 years,” he said.

The president also accredited seven other envoys at State House in Nairobi which included: Nepal, Hungary, Italy, France, Iraq, Japan and Zambia.
During the event, France’s Mr Remi Marechaux said that his country and Kenya faced a common enemy in the war against terror. He said France provided direct bilateral assistance to the Linda Nchi Operation and supported Amisom with $100 million (Sh8.5billion) this year. “Terrorists that we are ﬁghting in Mali, AQIM are allies of Somali’s Al-Shabaab and we cannot eﬀectively combat Al-Qaeda on one ground without ﬁghting all others,” the envoy said.
Italy’s Mauro Massoni said his country and the international community valued the pivotal role Kenyan leadership played in countering terrorism threat.
Zambia’s High Commissioner Mrs Josephine Chilufya Mumbi Phiri praised Kenya’s tireless efforts to restore peace in the Great Lakes and Horn of Africa. She said establishment of a Joint Permanent Commission attests to the desire by the two sister countries to cooperate and share ideas on various issues affecting them and the region. “It is my desire to build on the already existing warm relations and further explore other areas of mutual cooperation that would contribute to development in the two countries,” the High Commissioner said.

Japan’s Tatsushi Terada said Kenya and his country have enjoyed close and cordial relations for the last 50 years since the establishment of diplomatic relations.

The new Ambassador of Hungary Sandor Koscic expressed his desire to explore new avenues of friendship and cooperation between the two countries.