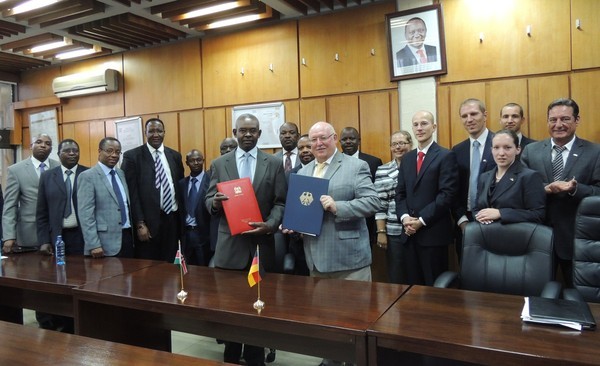 In a joint protocol, Kenya and Germany agreed to continue their close bilateral partnership. Germany committed to continue supporting Kenya in fighting poverty, providing better services for all Kenyans as enshrined in the constitution, vision 2030 and of achieving the status of a middle-income country where all Kenyans enjoy prosperity.

Germany, through the Federal Ministry for Economic Cooperation and Development (BMZ),  committed additional funds amounting to € 138 millions, equivalent to Ksh 15.7 billion for the next three years’ programming cycle. The future Kenyan-German Development Cooperation will focus on priority areas namely: agriculture, water & sanitation and health. Additional support however will be given in the areas of renewable energies & energy efficiency, education and the fight against corruption. All programmes will be implemented through GIZ (German International Cooperation) for technical cooperation and KfW Development Bank for financial cooperation.

The discussions in the Treasury which were chaired by Dr. Kamau Thugge, Principal Secretary National Treasury,  focused also on the implementation of the constitution, accountability as well as rule of law.  With its own experiences as a federal state, the delegation from Germany led by Dr. Ralf-Matthias Mohs expressed its support to the devolution process as an opportunity to bring decision-making and service delivery closer to the people. In this regard, Germany is committed to support capacity development of the county level as an important issue for its future engagement, as the responsibility for service delivery in the priority areas has been transferred to the county governments from 1st July onwards.

Kenyan-German Development Cooperation will support the fight against corruption and mal-administration. The independent commissions and oversight institutions established by the constitution are important mechanisms of monitoring and accountability and will be supported along the different stages to counter corruption – prevention, control and oversight, investigation and sanctioning.