She’s fondly referred to as Mama Maasai, or Mutter Courage (Mother courage). Grene Naisenya Schait-Maleko was born near the frontier to Tanzania in the Massai Mara. She got married off at the tender age of 12, “cow trading” as she prefers to refer to that marriage. She gave birth to three children before finally throwing in the towel and returning with the children to her mother’s house. A decision that would lead to her father denouncing her because he had to return the cows he’d received for her hand in marriage. Her passion to go back to school made her denounce her father as well in the heat of the moment.

Grene aged eighteen at the time left her children with her mother and moved across the border to live with her grandmother. The separation from her children was tough but she knew she’d be of greater help to her children and the community if she went to school. She met a preist who took her to the convent where she lived and went to school for eight years.

At 26 she was working as a nursing assistant in a hospital before she proceeded to be trained as a professional nurse in Dar-es-Salaam, the capital of Tanzania. Thereafter she was able to return to the small village to work in the local hospital and be reunited with her children. Unfortunately she wasn’t welcomed back with open arms, instead she lived as an outcast. “But this was a big joy: Iearned money and could support my family”.

It was during her stay in the village that she met a Swiss national with whom they started a relationship. They decided to get married and moved to Switzerland where her fourth child was born. They later divorced but she remained in Switzerland. She worked in several hospitals near Zurich and was able to bring her children to Switzerland for a better education where they all live, apart from one son who passed away.

She has been in Switzerland for close to twenty years now and currently owns and runs a shop in Klein Basel. She uses her experience to help other women who went through the same predicament as well as fight for the girls who might be headed in the same direction. 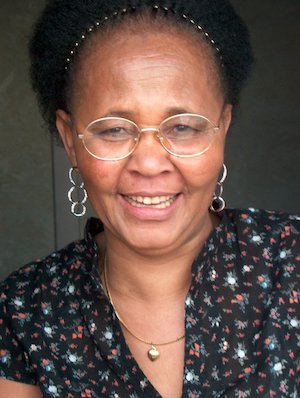 In 1995 she started the “Kinder in Kenia” (Children in Kenya) foundation that aims at empowering the youth in her village. She believes the most basic requirement for Africa are: access to clean water, family planning and health care. Through her project young boys and girls learn how to read and write then they are taught how to sew items which she sells at her ” Mama-Maasai” shop in Basel. The proceeds from the sale of the items are sent back to Kikambala to further the projects. “We must implement the European philosophy in Africa. The young people in Kikambala have to learn personal responsibility – only then can they reach independence and have a better future”.

Her organisation received a two and a half acre piece of land from the government, which she and her team converted into an oasis with a state of the art ecological sewer system. They have a language and sewing school, a metal workshop and soon a wood workshop for the carpenters. They offer computer lessons for the young people plus Sports and lessons in sustainable agricultural practices. Grene fondly refers to the area as «International Happy Life for Kenya Students Kikambala».

Grene aims at support the youth in their personal development as well as guide them taking up self-responsibility. “The basics here are empathy, appreciation and love”. Her faith in God remains her source of motivation and strength.

Although Grene is passionate about Kenya, she remains an integral part of the society in her tiny village in Switzerland. She’s no stranger to most people there either through her shop or her catering service that offers Kenyan food. She’s truly a blessing both in her home and adopted countries.