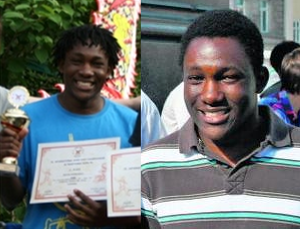 He might not be a celebrity but this Kenyan student from the University in Coburg is all over google. A short search for his name will find several articles on him. He’s active in all sectors of the University and in the community around him.

Kevin Agwanda, an architecture student in Coburg has been in the news in Coburg since he joined the University. Immediately he moved to Coburg he was part of the “GastFREUNDschaft” program that gets host families for foreign students to help them understand the new city and the culture of the place. Simply to help them find their way around the new city.

In June, he won first place at the Kung Fu Championships held in Köln. It was the first time he was taking part in a full contact fight. He’d done a bit of Taekwondo as a kid. A few months ago he trained with his trainer Sifu Rittirong Konggann on diverse throw combinations and within a year he was able to win the Championships. Although he wasn’t sure he’d be able to achieve it because of his light weight but over time, he realized that Kung Fu techniques stabilised him. During the match, his skills were amazing. The audience was thrilled by the performance and cheered him. ” You fight like Bruce Lee. Fantastic!”, a experienced judge told him after the fight.

Most recently, he joined the volunteer program for fire fighters in Coburg and made it to the news again. During his internship at a compressor manufacturer, he met Thomas Döll who encouraged to join him in volunteering with the firefighters.

You might be wondering why I’m sharing such minute details, but this is to encourage all of us to get involved in whichever city we’re in. Also it’s to show a different image of a Kenyan man in Germany, it’s good to find a Kenyan man in mainstream media for their GOOD activities within their community. Kevin is definitely a good example to all of us, you can study and still be able to be part of your community. He also shows that even we “foreigners” can take part in activities we might generally consider for “others”. You can do anything, that tickles your fancy from joining a Kegel group to a Kaffeefahrt group. As long as you have interest, find a group you enjoy and get doing what you love.

Where do you Draw the Line Between “Morality” and Making Money?