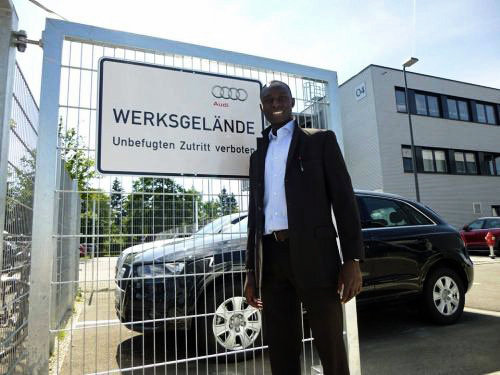 You listen/read some stories and you can’t help but wonder, what is keeping you from achieving your own goals.

When you see the 23 year old standing at the entrance of the AUDI offices, he looks like part of the top management. You’d never think that he was once living on the streets in Eldoret, a town in the Rift Valley of Kenya.

Shadrack Milka Kiprop, or as his friends call him, Shady, ran away from home at only seven years of age to escape the poverty that had befallen their family. He lived on the streets of Eldoret, cold and starving, with no family. The street became his home. It was inevitable that he would get arrested as he tried to sustain himself, he was arrested and taken to a juvenile jail.

Fortunately for him, his life was just about to turn around. In 2001 he was taken up in the “Street children Project” in Surgoi run by Kenia-Hilfe Schwäbische Alb. And as they say, the rest is history.

He has since completed his secondary school studies and studies, Airport logistics in Kenya. He has been in Germany since June this year where he was undertaking an internship at the Audi offices in Ingolstadt. He recently visited Bempflingen and auf die Alb where the organisation that helped him is based to talk to the church congregation and the youth group about his life in Kenya. Amazingly his whole presentation was in German. Shady attended a language course and passed his German exam at Goethe Institute.

You can read about the organisation: Kenia-Hilfe Schwäbische Alb