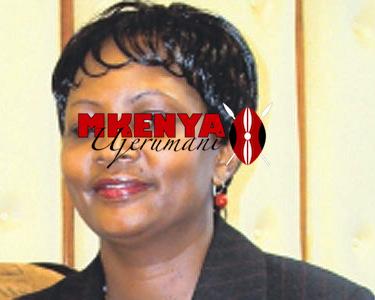 ” An Alcoholic IS NOT a looser. They might be down but they aren’t out.”

You can read her story below, or watch her tell her story. I recommend watching, she’s such a story teller. She used to live in Bonn by the way.

Ann Mathu has been to hell and back. The one-time alcoholic, only sobered up and got help long after she lost two lovers to alcohol.

By the time she got help at a rehabilitation centre in Homa Bay, her life had hit rock bottom and she was destitute.

Today, she has put her life in order and, though she trained in catering at Kenya Polytechnic, Ms Mathu has taken up counselling alcohol and drug addicts to help them ditch their habits and walk on the winding path to recovery. She visits and counsels those in need at home.

Before she began the home visits, which she now does on her own, she had worked at the Asumbi Rehabilitation Centre – where, incidentally, her life of alcoholism was turned around, and at Nacada.

She says she decided to quit her job and use her experience to help drug and alcohol addicts.

Ms Mathu recalls that she was barely 10 years old when her father who, was an alcoholic, introduced her to brews.

“My father and I had a special bond because I was named after his mother and he used to let me take a sip of his muratina whenever he was drinking around me,” she recalls.

This went on for years and by the time she was in class seven, she had progressed to a few glasses and had even started smoking cigarettes.

“My father used to ask me to light cigarettes for him and that is how I got into the habit,” she says.

Now a mother, these are things she does not wish for anybody’s children. Her father died when she was in Form One in 1977 and she continued the “tradition” of drinking and smoking, albeit secretly while at Bishop Gatimu Ngandu Girls High School.

Her drinking escalated when she joined Kenya Polytechnic in 1981.

“I had never had so much freedom and we used to be given a ‘boom’ of Sh500 by the government,” she says.

At the time a bottle of beer cost Sh3.50 while a packet of cigarettes used to go for the same price. With Sh20, she could party the whole weekend.

In 1982, she participated in the Miss Kenya beauty contest and came in second place. This entitled her to monetary rewards from the sponsors and she used all the money on beer.

After college, she was employed as a cateress at a secondary school in Nanyuki that was near a military base, where alcohol was cheap and in plenty.

“I would go to my house at lunch time and have a shot or two of vodka or Jack Daniels.” She quit her job at the school and joined the housekeeping section of a five-star hotel in Nairobi.

“I befriended the barmen who would give me alcohol before I started my shift at 6 a.m.,” says the mother of three. When her drinking got out of control, she was transferred to a branch of the hotel in Kericho.

“The managers did not want to fire me because I was a diligent worker and they thought that a change of environment would do me some good,” she says.

She was eventually sacked because after pay day, she would not report to work for days, and she had started drinking on duty. In 1992, she went back to her hometown in Thika pretending to be a victim of the Molo land clashes.

“I never told anybody that I had been fired and my family and friends came together and held a fund-raising for me so that I could get my life back on track.” She drank all the money. At this time she moved in with her boyfriend, a medical doctor, who was an alcoholic.

“He died from alcohol-related complications and I did not even see that as the signal that I needed to get my life in order. All I cared about was where my next fix would come from.”

A family friend thought she needed to get away so that she could mourn her boyfriend and invited her to Bonn, Germany.

“Within two weeks I knew all the bars in Bonn and within a month I could get drinks on credit,” she says.

She attributes this to the fact that addicts are very convincing liars and can be very manipulative to get a drink.

During this time, her children had moved in with her mother. While in Germany, she married a German man who was also an addict.

“Our love was brewed in Russian vodka,” she says.

She and her husband came to Kenya and stayed for a few months before he went back to Germany. He also died of liver cirrhosis.

All this did not stop her from drinking. She moved from a four-bedroom house to a shanty in Majengo slums in Thika after she ran out of money. She also started substituting the expensive liquor she was used to with chang’aa and busaa.

One day she drank jet fuel and vomited blood. That is when a family friend took her to Asumbi Rehabilitation Centre in Homa Bay.

She trained as a counsellor at the rehab and it is these skills that she hopes to use to help others.

You can watch her story:

How to Break Free from the Bondage of alcoholism

You can read a newer version of her story: From Miss Kenya to Miss Nothing

Should Children be Charged for Their Parents’ Deportation?

An interview with Nelly, the Kenyan pushed on U-Bahn tracks

Life in Kenya – the contradictions

Man from Kenya caught trying to smuggle money into Germany

Ruling is out on the extra fast student’s case