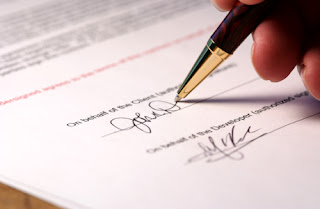 I’ve been calling and emailing people today in relation to some contracts I had signed. It can get on your nerves when you call person A who claims person B is wrong, only to call person B who denies and refers you to person C. After the whole merry-go-round, you do get tired and just give up even if what you are after is your right. I thought I should write a post on this issue on Contracts, German laws and getting lost in translation.

From my run ins with the many Beamters today, here are a few things I’ve learnt over time and I know helped in making the calls a bit more pleasant that they would have been.

How many of you read your contracts before you sign them?
Not reading your contract and signing it on assumption that what you want and what the person giving you the contract said is what is in it, can lead you into a lot of trouble. Many au pairs have signed contracts that did away with the basic €200 they should get from the host family. Many au pairs spend their whole year working day and night without attending the language courses that are stipulated by law and/or their contracts.

Research on the laws that govern the issue you’re handling

Considering the number of English speaking immigrants/expats in Germany you ar bound to find a reputable English translation of most German laws, you just need to find them. Google is your friend, your best friend. Problem might come in in trying to retranslate that to German to be able to argue your point, but the most important thing is for you to understand the law which you will achieve from the English translation.

If you have been here long enough, you might have figured out that most people here when they do not know something instead of saying they do not know and research on the issue, they will more often than not just tell you “Es ist unmöglich”(It’s impossible). Especially those at the Auslandsamt (Foreigners Office)….know the laws.

If you still don’t understand how all that law applies to you, seek professional advice. As Kenyans we have a habit of trying to use the cheapest way out. If you have to pay for professional advice, please do it might save you a lot of heart and head ache in the long run.

Call them till they get tired of your calls. Some will already dismiss you when they hear your accent, but insist. They’ll finally listen. I’ve always wondered when Germans (some Americans as well also pretend not to understand “accented” English) say they don’t understand what you are saying cause of your accent, I always thought when you are a native speaker, you can understand you native tongue regardless of the accent it’s presented in…..maybe that’s just me.

If the calls don’t work then visit them. Hehehe….I know it can be exhausting but after you call them thrice and they keep saying it’s impossible, print out all the needed documents and carry your file to their office, they’ll listen.

For the Au Pair, if your host family isn’t willing to listen to you, call your agent and s/he should sort it out for you. If you had no agent then you can cancel your contract and get a new family. Check what your contract says about canceling a contract. Some stipulate that if you and the family don’t get along then they send you back home, so check what is in your contract before you decide to cancel the contract. Cause if you go against the stipulations of the contract you might be liable to a fine and/or even jail time which will eventually mean you go home anyways.