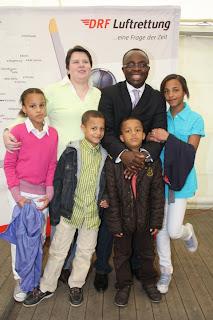 When Elombo left the DRC after taking part in a demonstration against Mobutu Seseseko’s government and landed in Germany as an asylum seeker, from all points of view his life was over but not from the way he saw it.

He left the DRC in 1992 and came to Europe for the very first time, first landing in Moscow and later moving to Braunschweig, Hannover and finally to Syke where he finally settled and applied for political asylum.

In his free time, he’s a husband, father, singer and drummer. Check out his website, here and/or watch this video about him.