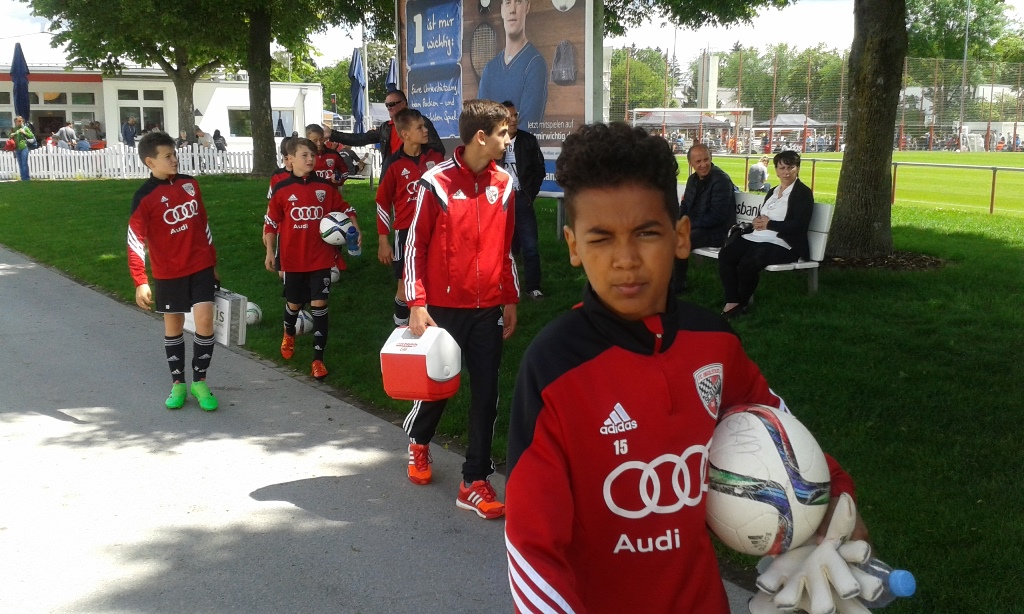 Meet Austen Onyango Bittner, a 12-year-old rising football star in Stuttgart whose goalkeeping skills have earned him the nickname “Django”, from his coaches and peers.

If you have watched the movie Django Unchained by Quentin Tarantino, then you will understand the comparison to the main character Django played by Jamie Foxx. In the movie, Django is calculating, keen to detail and very tenacious. He defies all odds and becomes the hero.

And just as the Django character, this young Kenyan-German Django brings the same qualities to the football pitch as well as on the goal post. It is in the way he manoeuvres the goal post, applying tactics reserved only for professional footballers.

Onyango, as he is fondly referred to, is the best card the team has; especially when it comes down to penalties.

“I simply love football,” he says.

“I play other sports like cycling and ice skating, but I like football most”, the ever smiling amiable teen says amid shy glances towards his mother, who is joining him on the interview. Their close connection is evident, you can see it from the glances they share or in the way Akinyi talks about her son.

While Onyango devotes time to a rigorous training routine three to four times a week, he has mastered the ability to balance between school work, his games, as well as participating in other activities with other kids his age.

How Onyango got to playing football? Akinyi narrates that thought was triggered even before Onyango was born. During her antenatal visits she had to answer questions or sometimes fill forms asking what sport she wanted her son to take part in.

“The questions were ridiculous, how would I even guess what sport the unborn baby would be good at?” Akinyi says with a brisk laughter that settles to a knowing smile on her lips.

When her son was born in 2003, she was again asked if her son was registered for any sport. What she didn’t know at the time was that with registration, the child could be tracked for sports opportunities. This ensures for example in cases where the family moves, the child is given priority at the sports club in the new place they move to.

Akinyi being passionate about football and chess, registered for both Onyango. At only four, Onyango started training; first at GSV Maichingen in Sindelfingen then SV Karlshuld where he stayed for four years. It wasn’t long before Akinyi noticed that most kids were not keen on goalkeeping, spotting an opportunity for her son, she enrolled him for specialized goalkeeping training.

After a year of training, an opportunity presented itself when the goal keeper in the team opted out. Onyango was about eight, and that was the beginning of his cherished affair with goalkeeping.

He would later be recruited to the Nachwuchs Leistung Zentrum (NLZ), a centre for kids engaged in extreme sports aged below 16. He soon became a star on the goal post. Coaches were impressed with his prowess evidence that his time at Maichingen and Karlshuld had prepared him well for NLZ.

Onyango says he knows that even though he is good at football, school is very important and he must dedicate his time to complete all his assignments. The coordination between the NLZ and the Gymnasium helps parents keep tabs on the progress of their children, especially in keeping the balance between practice and school schedules.

Akinyi is quick to note to succeed in sports, children need parental support. “I have noticed that children who are sent to trainings without proper follow-up from parents give up on the sport all together”.

She however, admits that it can be difficult for working parents to keep up with the routine. Fortunately for Akinyi, she works from home thus gaining the flexibility to follow up on Onyango and his activities.

In addition, Akinyi has enrolled Onyango in a Nachmittags Schule (After School Classes) where he gets to do his homework and a bit of extra reading before going for training. “These kids have to juggle between studies and sports and sometime do homework in the car or on the bus. The Nachmittags Schule has helped him balance his school work”. Akinyi explains.

Onyango who attends the Gymnasium is keen on studying Sports Science (Sportswissenchaft).

Infact, Onyango’s performance has been so splendid that the German Football Association (Deutscher Fußball Bund, DFB) recently spotted him. With its headquarters in Frankfurt am Main, the DFB is the governing body of football in Germany, it’s a founding member of both FIFA and UEFA. The DFB is also charged with talent search to spot kids from different clubs around Germany, and groom them for the Bundesliga.

Onyango has had outstanding performance as the best goal keeper in season tournaments. In 2013, Onyango participated in the Fußball internat (Football Camp) in Bad Aiblingen, one of the best camps in Europe bringing together upcoming young players. The kids are graded on their performance not only on the pitch, but  also in how they conduct themselves from mannerism, organization to tidiness. At the end of the camp, the kid who scores the highest points, gets the “Spieler des Camps” award.

Although Onyango was the youngest in the camp, he scooped the award securing a sports scholarship for a year. Akinyi says that after weighing different priorities, they did not accept the scholarship because it would disrupt his academic schedule.

Together with his mother, Onyango is involved in the mentorship of the Makadara football team in Nairobi. He says during their last visit to Kenya, he got to practice with the Makadara boys and even participated in a tournament in Nairobi.

He says he continues to share football interests and tips on social media with his friends in Makadara. On other hand, Akinyi applauds Makadara coaches who despite lack of sufficient resources have dedicated their time to mentor young talents. She is hoping to raise funds to support local football teams in Kenya.