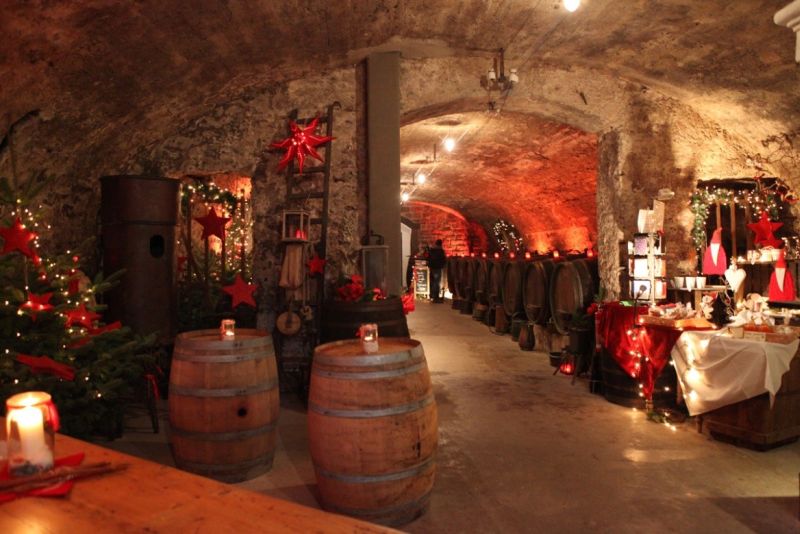 If traditional Christmas markets, stocked with Glühwein, Lebkuchen and cutesy carol services don’t quite do it for you anymore – here are some Christmas markets that go that extra mile to give you something unique.

The Engelmarkt in Emden does away with the traditional winding streets of Christmas markets by moving the festive experience onto water.

The market in the small harbour town in north-west Germany is partly set on boats, including the museum ship and traditional sailing ships.

This market almost defines Gemütlichkeit (cosiness) as the lights shine down from the majestic ships’ sails and masts on the crowds soaking up the smells of cinnamon and punch below.

In the wine country along the Mosel, they go all out and turn one of the wine cellars into a Christmas market. As the adults cuddle enjoying some red wine, kids can go ice skating or build lego blocks and everyone goes home happy 🙂

This might not be one to bring the kids to – although the organizers insist it offers the regular Christmas fare, as well as more distinctive flavour of St Pauli, the district where it is held every year.

St Pauli is famous for the Reeperbahn, a strip full of table dancing bars and brothels, and this market also provides a ‘Santa Pauli strip tent.’ Also on offer are vibrators and a plethora of other ‘adult products’.

It advertises itself as Germany’s hottest Christmas market and so one assumes no Glühwein is needed to bring a glow to the cheeks.

At the other end of Germany is a small Christmas market in a no less charming or unusual location.

In the Black Forest in southern Baden-Württemberg is the Ravennaschlucht market, situated in a canyon underneath a rail bridge.

On offer in this secluded, secretive spot are fine crafts from over 40 stalls.

There is no doubt that Germany mainly does a wonderful job of avoiding the tackiness of Anglo-Saxon Christmas. But if you want to keep it really real, then head for the market in Weben on the Elbe.

In Germany’s smallest Hanseatic city they are so determined to avoid the modernisation of the festive season, they don’t even have electricity in their market.

So expect to drink Glühwein boiled in a cauldron and to have your path through the wooden huts guided by candles and oil lamps.

This market that makes the phrase camp as Christmas come true, Pink Christmas in Munich was developed by the city’s gay and lesbian community to get away from the staid traditional market and provide something original and witty.

A particular highlight is the live stage, which offers a broad range of music and entertainment. Expect to see wild costumes as well as lots of glitter!

For those determined to have snow at their Christmas market, no matter the cost, the answer lies on Zugspitze, Germany’s highest mountain.

The 2,900 meter peak is home to Germany’s highest Weihnachtsmarkt – just make sure to dress up extra warm for this one.

And if you’re planning on skiing back down (it is located on a ski resort) lay off the Glühwein!

There are over 200 stalls selling handicrafts and delicacies at the Christmas market in Velen near the Dutch border. But what makes this market so enchanting is the setting. Guests stroll along past stalls which are set inside a forest of over 1,000 trees.

And with over a million lights to give the grotto a sparkle, you’re sure to have a flash of inspiration for what to buy.

Kenyan Starring in a Play in Bonn