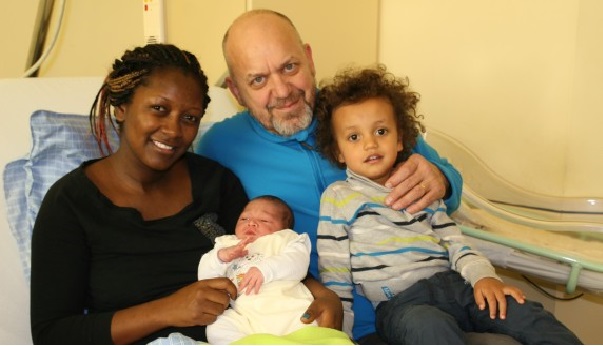 2015 saw yet another Kenyan-German offspring make a grand entrance in Aichach.

At 11pm on New Year ’s Eve, Petronilla experienced her first contraction and was immediately rushed to the hospital. Seemingly in a hurry to get to the world, Leo was ready to get out before the formalities of checking in at the hospital were done. At exactly 1:23am, Leo came to the world with the strongest lungs ever.  Unlike Leo, his older brother, Louis, took 5 hours labour before he was ready to see the world.

The two year old Louis was at the hospital to see his youngest sibling, touching Leo’s face as his mother was breastfeeding him.

The third born child to Petronila and Richard Franz, is a great addition to the family. We at Mkenya wish the family all the best and a hearty welcome to Leo.