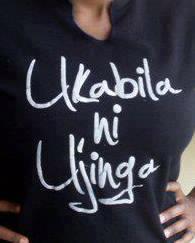 C: So where do you come from?

M: Kenya. (I gave up trying to name where I live in Germany, cause more often than not that is followed by…No, I mean where do you originally come from?)

C: You can’t be kikuyu, you’re very dark. So you must be luo. Most Kikuyus are very fair skin.

M: You know Kenya has 43 tribes, so why did you decide I must be from these two?

C: (Silence…) 43 you said? I only know those two. My wife is half kikuyu half German and she has very fair skin. Her mother who’s all kikuyu is also of the same complexion and so are most of their relatives back in Kenya.

M: Well, all tribes come in very many shades. There are very fair Luos as well. Anyhu, we’re all Kenyans anyways and that’s all that matters.

This isn’t the first conversation I’ve had with a German who turns a harmless conversation into a tribal identification interrogation. But why would our tribes matter to Germans? Because we make it matter. You and I as Kenyans living in Germany, we’re so tribal that the Germans have caught on. The Spiegel, ran a story and one of the headlines was “Kikuyu Fathers don’t love their children“…..honestly? 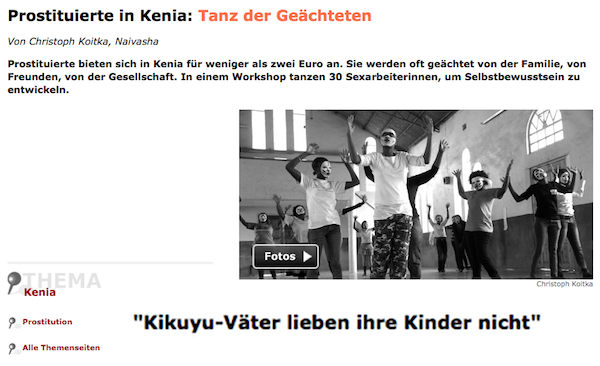 But let us not miss the point and blame the journalist who thought that would be a good “headline”, let’s blame it on us.

Mkenya: Habari zenu. (I greeted the ladies as I entered the room during a wedding celebration)

(I greet all the ladies as I introduce myself (using my English name). Then I sit and enjoy my cake before the lady turns to me)

Lady: So where are you from?

Sometimes I’m honestly very ignorant of what people are getting at, especially when someone is trying to find out my tribe. But nowadays I make it easier, I stopped using my English name. Now that I never use my English name, the conversation goes more like this:

Person: So what is your name?

Person: No, I mean your English name….

Aren’t our “tribal names” names? Kenyans are a very modernised style of colonial. My use of my “original” name has gotten some people calling me tribal. Apparently, using an English name reduces tribalism. From my point of view, using your indigenous name would only bring tribalism to you and not from you. If I meet a tribalist who is against my tribe, they will be against me immediately they find out my name rather than if I had used my english name. But this is an oxymoron, because in most places if you give an English name, it will be followed either by a silly conversation like the one above or by the other silly question, “What is your second name”.

A Kenyan lady passed away recently and as one person was coordinating her funeral, others outright said they wouldn’t attend because the lady who had passed on was from tribe A while they were from tribe B. Some Kenyans here refuse to go cheer marathon runners because they aren’t from their tribe. Some will organise events and name them “Kenyan” yet they aren’t open to some tribes.

Ati one Kenyan lady went to a “Kenyan” event and after they noticed she didn’t speak the “lingua franca” at the event, they asked what tribe she’s from. When she told them, one lady retorted, “How did you get to Germany?”….lol….Are there tribes that aren’t allowed on flights or are there tribes that don’t get visas?

Honestly, we can’t gather and pray for Kenyans back home to be united and yet we’re split.

I’ve said it before and I say it again, Tribes aren’t the problem, the issue lies in how you and I relate. We can be civil without involving our tribes ama?

Why is it when we invite Germans to our events we are ready to change the language of instruction for the whole event to English or even German so that they can understand and yet when we have Kenyans who aren’t from our tribe, we can’t even simply switch to swahili so that we all understand one another? Why insist on speaking ONLY your mother tongue at a “Kenyan” event?

My challenge to you is to start looking at people as human beings instead of checking for their tribe. From my informal survey, we’d have less issues and dare I say less issues of people getting depression or even dying from it, if we tried to interact with humans instead of our tribes. Most of us are busy hanging out with people who have no inkling of goodness in their hearts for us just in the name of tribe. They will bring you down. Some people are evil, and that has nothing to do with their tribes.

To all those who keep saying “Kaa mbali na wakenya”, I could bet most of them only hang out with their tribe mates. I’d honestly say all my very good friends, those who I can call on at anytime and will drop everything to help, aren’t from my tribe. On the other hand, the people who’ve made me want to delete Mkenya Ujerumani and just live like it never existed are usually from my tribe. Those people who will taunt you and be planning on how best they can destroy your life….those have been from my tribe. Even as I write Mkenya, most of the appreciation comes from other tribes, my tribe….hehehe, are the ones out running propaganda.

Truth is we have only two tribes in Kenya, “the rich and the poor”, “the haves and the have nots”, “the somebody and the nobodys”. If you fall in the second category, please refrain from stepping on toes of your fellow “category” mates as you try to impress the other category because after that escapade has elapsed, you’ll be left struggling with those who would have helped you. This habit of Kenyans bending backwards because they hear someone is related to politicians from back home while totally neglecting others, is totally out of place.

It’s 2014, can we be open to help one another and be there for one another as KENYANS and NOT just as our tribes? Don’t exclude people at events because they aren’t from your tribe. Don’t refuse to help. Accomodate others, you’ll be surprised they could be the blessing you’ve been shutting out of your life.