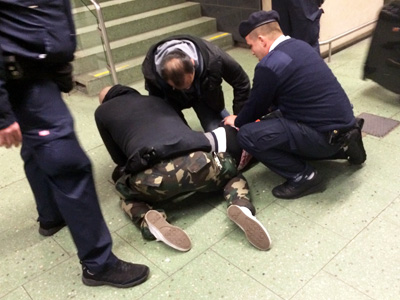 Well! Well! Well! There are always going to be racist elements in any society, and educational campaigns will do little to change their views. What we need to do, however, is to start to stand up to racist behavior.

I have been appalled at the sheer amount of video-taped racist incidences on public transport in which passengers say absolutely nothing in the face of despicable abuse. After watching a Youtube video documenting a racist attack in Australia

I could not but keep asking myself what I would do as a victim in such a situation. More specifically, what would be the best way to react and (if there was) what are the chances that I would react that way?

“When that used to happen, I would pretty much get into a fight. But I guess when you are at that age, you don’t really have a weight to bear, you are not really well educated and you just react…relevant response”, says Marcus from Berlin. Many people resort to physical confrontation as a reaction to oppression of any kind, and sadly end up being charged for physical assault. In Germany for instance, the legal principle “Recht muss vor dem Unrecht nicht weichen” might easily get one to face criminal charges. In fact, it means that if someone else begins a physical confrontation with you, you are not under obligation to retreat from it. In context, verbal abuse is no justification to physical confrontation. “But if it would happen today then I guess I would be a bit smarter in the way I reacted/ responded. I guess there is only so much education you could teach to racist people out there. I do not think it is working and it is a tough question to answer”, continues Marcus.

When you stand up to racists and proclaim that it is neither right nor acceptable, then the issue is squashed there and you are making it clear to the rest of society that it is not tolerated. But how would one go about doing this? Amina, a Kenyan student in Darmstadt says, “When someone acts racist towards me, I normally tell them that it is not cool. We are people, we are equal, we have feelings and no one deserves to be treated like that. Their response would then be that they had not thought I would interpret literally what they said, and that they are just words anyway. But words do hurt and people need to be a little more sensitive, respectful and aware of other cultures.”

Another alternative (and sadly so) would be to take everything with a dose of humor. If you do not give it importance, then they will not achieve their objectives. One football star demonstrated how ineffective sport’s ongoing fight against racism has been when he ate a banana hurled at him during a football match

Indeed, the best way to beat prejudice is to take the sting out of the racist action so it isn’t repeated.

Racism is an ignorant person’s best weapon. There are phenomenal white people who really don’t use race as a weapon and awful black people who use it as defense. The only true weapon against racism is doing what you do and doing it to the best of your ability. When one calls someone a monkey, if the “someone” can win every game they play against the “one” then rest assured that the relevance of race won’t surpass that of statistics.

That said, what is the right way to react to racism? It would not suffice to give a specific answer as there is more than one way to do things. However, keeping a positive mental attitude, responding decisively and not allowing your emotions to get in the way might just help to avoid trouble. After all, crisis often results when composure is missing.  At the same time, we should be verbal about it and collectively get the word out there to the people that we have had enough, we are over it and it needs to stop.