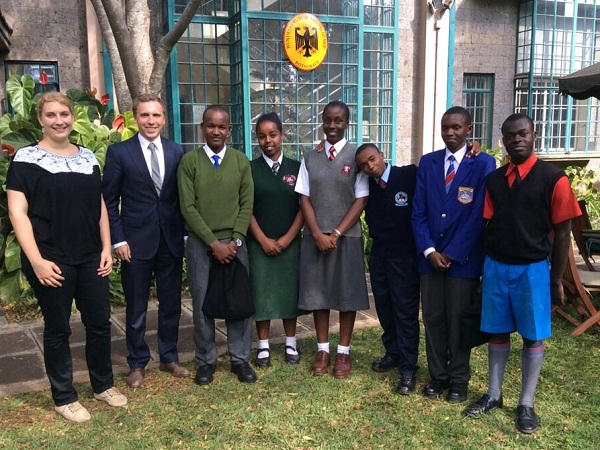 Germany has been encouraging the learning of German especially in East Africa for quite some time. They offer annual Summer school trips to high school students as well as exchange programs for students and teachers.

This year’s group of students coming to Germany on the PAD Program have been named and they were  hosted yesterday at the German Embassy in Nairobi. The students who won a German language competition, were among numerous applicants. They will be visiting Germany from mid August to mid September 2014.

The students will live with host families in Germany and travel to Cologne, Munich, Berlin and Hamburg to experience the German culture and explore the cities.

“This is an excellent opportunity for Kenyan students to get to know Germany. We are very happy that so many Kenyans want to learn German. Mutual interest is the basis of friendship between Kenya and Germany.” the German Ambassador to Kenya Andreas Peschke remarked about the program.

The annual programme is funded by the Federal Foreign Office and organised by the Pädagogischer Austauschdienst (PAD), an organisation in Germany working on behalf of the Federal States to promote international exchange and cooperation in the school sector. Every year, four Kenyan students can benefit from the programme together with students from 90 countries.

Germany supports the promotion of German as a foreign language at Kenyan secondary schools within the scope of the “Schools: Partner for the future” initiative by offering training for teachers and donating modern teaching material.

You can read about other Kenyan students who’ve been to Germany through this program here:

Precious Girls’ Student shares about her trip to Germany

And the teachers here: