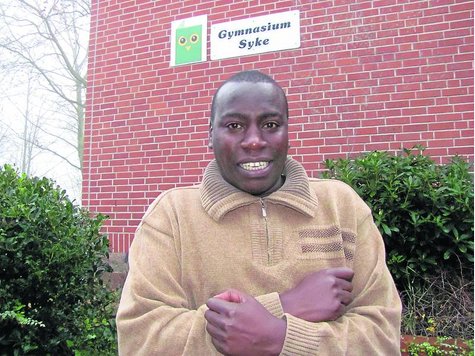 Four degrees and foggy, definitely not the ideal weather for a man from a country where the average temperature in a year is above twenty degrees. I’m having an appointment with Peter Kibuiya a 41 year old teacher from Kenya. He’s ready to take the pictures dressed in thick pullovers, he has slowly become accustomed to the German weather.

Today is Peter’s last day after 3weeks at the Gymnasium in Syke, as part of the Pädagögischen Austausch Dienst. “It was an amazing time”, Peter recalls.

He has been teaching German for the past 15yrs at a school in the outskirts of Nairobi. He learnt German at Goethe in Nairobi then came to Germany for his Diplom. He lived both in Berlin and Munich while in Germany.
This is his fourth time in Germany but this time he’s in a rural village, living with a couple Wiebke and Olaf Westermann in Neubruchhausen. “I’ve heard a lot about living in rural areas, the atmosphere and solidarity here is almost like back home”, Peter explains.

“It’s interesting to watch how lessons take place here.” Peter says, and he has also noticed some differences, “Pupils here take part in the lessons, in Kenya discussions from students are considered indiscipline but that is slowly changing”.

Peter had the chance to be part of some classes, first as an audience or as a participant. “I had to present my country to the class 5 pupils and they were wowed and kept asking questions. Some even wanted to learn Kiswahili from me.” Peter was definitely impressed by the kids’ curiosity.

on sharing his view about the people in the area he stayed in this time, it sounds more like a declaration of love, “The people here (North West Germany) are more friendly than those in the south”. Good to see that he liked the north even despite hearing about racial attacks in the area.

Tomorrow he flies back to Kenya to his wife and 3 kids, ready to enjoy the 25°.