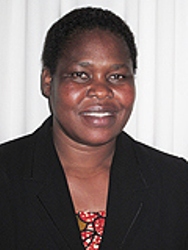 Selline Korir, the Executive Director of the Rural Women’s Peace Link has been named this year’s recipient of the 2014 Mietek Pemper Award of Augsburg University for Reconciliation and Understanding. Her dedication to further peace and reconciliation in Kenya has been noted.

The award that comes with a €10,000 price will be awarded to Selline on 3rd April 2014, at 6pm in the  Golden Hall of the Augsburger Rathaus.

In her letter to Selline, Prof. Dr. Sabine Doering-Manteuffel, President of Augsburg University, states “Your outstanding humanitarian commitment makes you the ideal candidate for this award. We are particularly impressed with the large number of projects you initiated to promote reconciliation and conflict mitigation. Within your project work, you deploy numerous and diverse strategies for communication and interaction, which shows your ability to think out of the box and to find highly innovative solutions to complex problems. Furthermore, your widespread professional network documents the sustainability of your achievements in reconciliation and international understanding. Your distinct and straightforward communication style is indicative of your high level of credibility and your personal integrity.”

“Let us deal with our tribalism, our negative ethnicity, hapa [here, in Swahili], hapa, hapa,” she says, “Tuna Uwezo” (We have the power). A slogan she used often when she headed the peace caravan across the country.

Her message to young girls interested in activism: “This is their time. Assert yourself. Learn to be a smart activist and assume that no one will give you the space. Fight for your space and do not shy off. Document well; you need to have evidence about the issues informing your activism. Do your messaging smartly. For example, during these 16 days of activism against gender-based activism, what exactly do you want to tell the administration such as county governors? Know your target. Use the Constitution, the laws and international instruments in your work Nobody should be left behind. Include rural women and girls in your work as well as men. It is important to include men in activism around women’s rights.”

Initiated in 1999, the Rural Women Peace Link is a network of grassroots women’s organization operating in areas affected by armed conflicts in western parts of Kenya, which emerged to respond to the women-specific concerns and issues that were emerging during and after ethnic clashes. RWPL continues their passion and commitment in spearheading campaigns to promote human rights issues affecting communities, especially women, girls and children. The RWPL collaborating with various partners remains at the forefront in promoting campaigns through public forums and internationally recognized events.

The award was established to honor the legacy of the Peace of Augsburg, Germany (1555), which has earned Augsburg the designation “City of Peace”. The award is given to individuals or institutions that have made major contributions towards reconciling different peoples, ethnic groups, and religious communities. The Mietek Pemper Award is dedicated to acknowledging outstanding, sustainable, and unconventional achievements in the area of mediating in and solving secular conflicts in politics and society.

The first recipient of the Mietek Pemper Award was former U.N. Chief Prosecutor Carla Del Ponte in 2007, the second was Mr. Richard Holbrooke, U.S. Special Envoy for Pakistan and Afghanistan in 2009. In 2012 the award was given to Khaled Abu Awwad and Nir Oren, Managers of the Parents Circle Families Forum in Israel and Palestine.

Selline is a graduate of Africa Peace Building Institute, Zambia, with extensive orientation and exposure in conflict and peace building processes. She holds a Masters Degree in Economics from Shivaji University, India.