Trust Germans to feature the weirdest news from Kenya. If you’ve been under a rock and haven’t heard about the quail madness, now you know.

Kenyans are going crazy over quails, from eggs to the bird itself. In the Süddeutsche they featured the story focusing on the claimed health benefits. Apparently over 200 Kenyans are getting a licence from the Kenya Wildlife Services daily to allow them to rare the bird. Some farmers have completely replaced their chicken with quails. Economists are worried that the market has already become saturated, with the market price for quail eggs having dropped drastically in January despite the increased demand.

The quail eggs are being purported to have some miraculous effects. Already a 31 year old Kenyan man died after a friend advised him of the aphrodisiac effects of the eggs. The man ate 30 eggs at once to increase his libido, but ended up dead.

For some characters, quail eggs have been used to replace their hypertension medicine and others even their insulin. According to Dr Ignatius Kibe,  a pharmacologist who spoke to the Standard Media, “There is a misconception and unnecessary excitement. Quail egg is not medicinal but nutritional.” He says that passing any product not approved by the Pharmacy and Poisons Board as a drug or a medicine is contravening Chapter 244 of the Laws of Kenya, the Pharmacy and Poisons Act.

A Kenyan lady was arrested in the US when she tried to smuggle in quail eggs, most probably after her visit home during the festive season. The lady below has to be the funniest, according to her quail eggs have reduced the traffic jam on Ngong’ road. 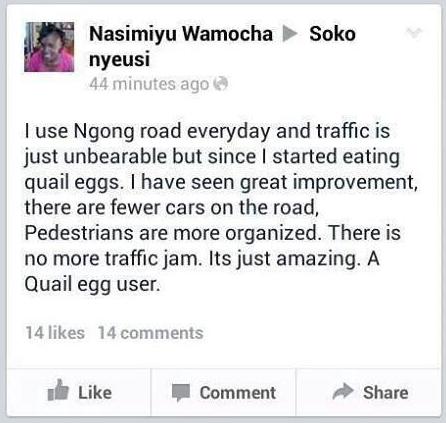