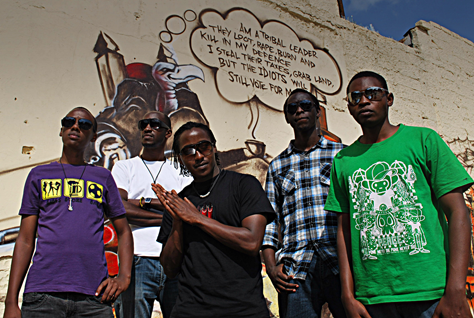 This year’s 49 degree MetalZone Festival in Bayern featured two African metal rock bands: one from Kenya, the Parking Lot Grass (PLG) and another Angola. The annual festival aims to bring together metal rocks from across the world, their belief is that if you love metal rock, it doesn’t matter where you come from. (A very noble idea, wish churches would think the same)

Alongside the music performances they also had a photo exhibition of metal rock fans and musicians from the African photographer, Frank Marshall.

If you’ve followed the Kenyan metal rock scene, you might know this group. PLG has been around since 2006 but it started performing in 2010. The group that started out with just colleagues from college, has grown to become a force to recon with in the Kenyan metal rock stage. They have won numerous awards and continue to trailblazing with their music.

You can watch the video footage of the concert in Bayreuth here: Hochschultv or read about them and their music on their site here: PLG.

I actually never knew there was such a hard metal band in Kenya, and that their music is actually good, I’m very impressed. When you hear of hard rock, you think of screaming, dark videos and gothic scenes but not with this group. Their music actually has lyrics, and their videos are recorded in “kawaida” Nairobi with sun and daylight. I’m not a hard rock fan but their music, I’d listen to and even attend their concert. Check out their new video below, let me know what you think.

Business as a Chance out of a Violent Relationship