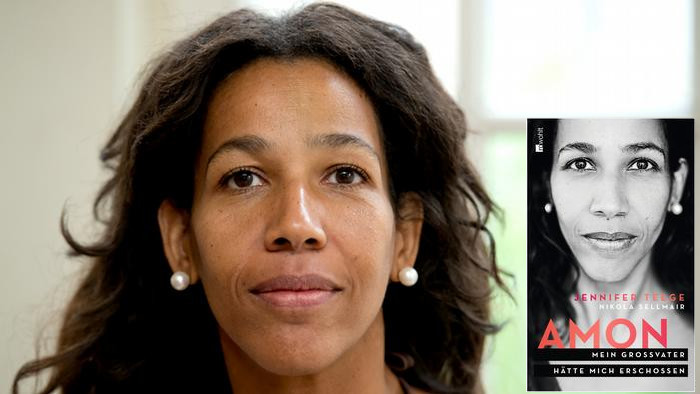 Most of us grow up only knowing our grandparents as our parents’ parents and nothing much, but for this Nigerian-German woman her grandfather was a famous Nazi criminal. The realization that your own grandfather would have been against “someone like you” can be devastating to find out for anyone.

Jenniffer Teege, a 43 year old Nigerian German was born in Germany after a brief affair between her German mother and Nigerian father. Soon after her birth her mother gave her up for adoption and she grew up in a foster home. In the beginning her biological mother and grandmother would visit her, but then the contact broke off.

During her school days she’d work as a model to earn a living and worked with holocaust survivors who she read to in German. None of the holocaust survivors she interacted with never knew she was German and neither did she until she started her search.

Jeniffer who has been researching on her roots recently found out that her grandfather was the Nazi criminal, Amon Göth. At 38 Teege accidentally found a book and recognized her mother on the cover. The book was about the concentration camp commander Amon Göth and his daughter Monika – Jennifer Teege’s mother. Amon Göth most famous after Spielberg’s 1993 movie, “Schindler’s List”. Amon was the former commander of the concentration camp Plaszow close to Krakow in Poland where he killed jews. He was hung in 1946 in Poland as a war criminal for the torture and murder of thousands of victims.

Her grandmother Ruth, who used to send her birthday cards and visit her at the foster home, had lived for a time with Göth as his lover in the same camp villa from which he savagely murdered prisoners. Ruth had met Amon while she was working as a secretary for Schindler in Krakow. Their daughter Monika was born in 1945. Ruth took Goeth’s name shortly after his execution and, denying his crimes to the end, still had a picture of him hanging above her bed when she committed suicide in 1983.

Through her book and research, Teege is facing her family history. She looks through pictures of her grandmother, who temporarily lived with Amon Göth in his concentration camp villa. She often travels to Krakow to the scene of her grandfather’s crimes. She meets with historical witnesses who remember the horrors of the past. She reads everything she can find about the Nazi past and talks to psychologists to help process it all. “You think that if you don’t talk about something, then it won’t have any impact on you. But in my case the silence had a destructive effect,” she said.

All her life Teege said she suffered from depression, but now she feels very well. “Your origin is decisive in your own identity, and every person needs to feel their own identity,” Teege said. So far she has focused on her German family history but in the future she wants to get to know Africa and travel to Nigeria – the home of her biological father.