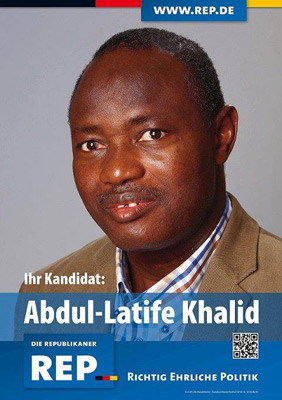 As I always say, there’s never a dull day in Germany. Vituko na sarakasi in all corners, you can either let them get to you or just laugh them off.

This African guy has got everyone talking, not only because he’s an African muslim in a Nazi party but because he’s like the best kept secret from that party. No one has ever heard of him and until recently no one had ever seen any images from him. Everyone thought he was a “ghost” candidate which he still might be considering no one has actually seen him physically, other than the pictures on the campaign posters and an interview he gave to a local paper.

Everyone got to hear about the mysterious candidate only after they saw the ballot papers and saw his name on it. For the reporters who were curious enough to actually try and find out who he was, they were taken for a real trip being sent back and forth without being given any real info. Apparently, even reporters weren’t allowed to talk to Mr. Khalid directly and had to instead use a middle man to ask questions.

According to the ballot paper, Abdul-Latife Khalid works in a warehouse in Dachau and will be running on a Republicans’ ticket. The Republican Party revealed that Abdul is actually from Togo and became German in 2009 but details to why he joined the party or even why people should vote for him haven’t been shared. Apparently, reporters made his life hard by trying to interview him and his employer thus his number remaining private and that he has no email address thus questions can’t be sent via email.

The Republican Party is known for its strong stand against anything and anyone that might sound or look foreign even their list of commitments list actions against foreigners and foreign behaviour in Germany, so why have an African muslim in the party? The whole story sounds fishy and most people don’t even believe the candidate is real, let’s wait and see what happens after the elections, maybe if he wins he’ll finally show up.

For now the mystery continues….