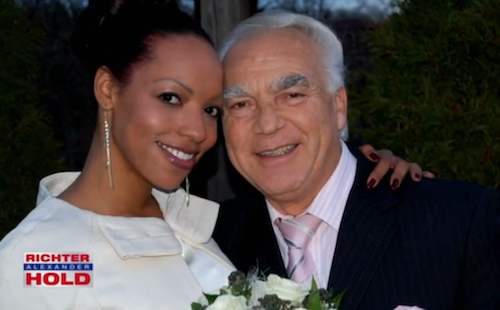 A while back they featured the lady pictured in one of those funny shows. Apparently, the 27yr old had married a 48 year old German entrepreneur who later died of an insulin overdose. The step-daughter had testified against the “Kenyan” and had her arrested for the murder.

You can watch the trailer here before they take it offline: Eines liebes Heirat – Richter Alexander Hold.

My worry with this episode is simply the fact that this “theme” has been reoccurring quite often in Germany of late. Remember the 30year old Karima Timbe, who didn’t even look Kenyan, who was also arrested for murdering her 70 year old husband for his inheritance.

It seems these German shows are having a field day with this new theme of young Kenyan women who kill their old husbands. I wonder what has encouraged it, considering I haven’t encountered a single real life case of a Kenyan woman who has killed their husband in Germany so why this funny stories? Although there is one who beat her husband, remember: Kenyan woman beats German husband

Considering Germany is a Schuhblade Society, I’d hate to have ALL Kenyan women being put in that box.